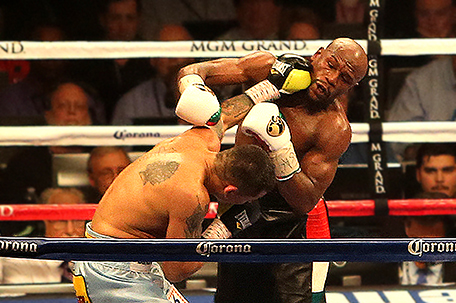 The only fight that boxing fans want to see is a fight between Floyd Mayweather Jr. and Manny Pacquiao. It’s time for the two of them to stop talking and take it to the ring

Of course, the real buzz about this particular fight was Maidana’s ability to bull Mayweather into the ropes and throw a high volume of punches while keeping him off balance.  Because we’re so used to Mayweather pitching shutouts in the ring, Maidana’s performance in the first four or five rounds had boxing fans believing that it was well worth the $75 it cost on pay-per-view.

After Mayweather pulled out the decision, folks, mainly the announcers from Showtime, were calling for a rematch between the two combatants.

As entertaining as the Maidana fight was, a rematch would be a monumental waste of pay-per-view TV time. The only logical opponent for Mayweather is Manny Pacquiao.  Maidana, Amir Khan and Adrien Broner need to sit on the side and wait for the clash between the true titans of the sport.

For one thing, Maidana’s coming forward and throwing a large number of punches that didn’t land is not enough to call for a rematch. I could see if Maidana had knocked Mayweather down and really beat him up. But that didn’t happen as Mayweather assumed command of the fight from the sixth round forward, and treated Maidana like he was a member of his “Bum of the Month” club.

It’s a shame that two of the best boxers of the current era—Mayweather and Pacquiao have yet to get in the ring and have the kind of epic showdown that’s defined the history of the sport.

You would think that boxing, a sport that has been slowly and steadily moving toward the outer rim in the sports entertainment galaxy and is slowly becoming unable to compete with football, basketball and baseball for the public’s esteem, would have pulled this off by now.

Between promoters, the politics of boxing, accusations of doping and the fighters themselves, the only fighting we’ve seen has come in the form of trash talk. Both Mayweather and Pacquiao’s camp have worked really hard to find reasons not to fight.

The problem now is that these guys are not getting any younger. Mayweather is 37 and Pacquiao is 35. At the rate these guys keep dancing around each other, they’re going to be too old for anybody to care. The window of opportunity for these two get into the ring against each other is starting to close.

If they do get in the ring, let’s hope it’s not as irrelevant as Bernard Hopkins and Roy Jones Jr., who met in a rematch that came 17 years after both fighters were well past their prime.

In the world of combat sports, boxing is facing competition from mixed martial arts, which is growing and starting to gain momentum. A Mayweather-Pacquiao in the near future would certainly be a boost to the sport.

What’s really at stake for Mayweather and Pacquiao is their respective legacies in the sport. For either one of them to stake their claim as the greatest fighter of the 21st century, they have to fight each other.

So Floyd and Manny do us a favor get in the ring and beat each other’s brains out, two or three times if possible, so you can help today’s young sports fans say the saw two of the greatest pound-for-pound boxers of all-time.

Time for Mayweather to fight Pacquiao