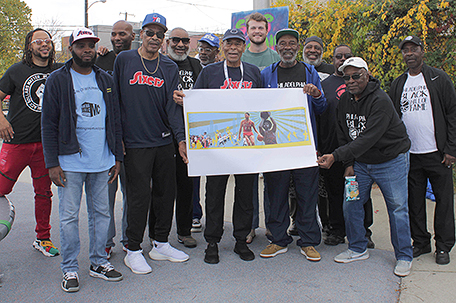 ABOVE PHOTO: Wali Jones (center) with his friends displays the rendition for his mural in Mantua at the 37th & Mt. Vernon Street Playground.  (Photos by Jim Brown)

The greatest “assist” Walter “Wali” Jones has given Philadelphia — besides winning the NBA Championship in 1967 — has been returning here to engage young people and serve his community.

Jones was recently presented wth an artistic rendering of a mural that will bear his likeness at 37th & Mt. Vernon Street Playground, located in the Mantua section of West Philadelphia. Gabe Tiberino, one of the lead artists for the Mural Arts Program, will begin the mural project in the spring of 2023. He has previously painted murals for Miles Mack Playground and one featuring the late Dr. Herman C. Wrice.

The presentation took place during the Mantua Civic Association and We Embrace Fatherhood’s  day of community engagement, where over 180 people were in attendance.

One of the event organizers, Derek “Bub” Pratt, explained why the mural was being created for Jones.

“First and foremost, [in order to] give him his flowers and recognition while he’s here,” Pratt said. “He can see it and be a part of it.  For the most part, I’m into giving people their flowers while [they] can smell them. And, he’s been a leader and an outstanding educator and basketball player, a champion. He was born and raised in West Philadelphia. So, I want to make sure we honor him and make sure our future generations know our history.”

Jones, who  gained his reputation as a fierce competitor at Overbrook High School in West Philadelphia, continued as a highly touted guard at Villanova University. He went on to play with the 76ers as a powerful guard on the 1967 championship team.

For the last 20 years, Jones has been engaging student athletes in basketball clinics with an emphasis on teaching them to be productive.  He is not alone in his quest to see them succeed.

There is a long history of activism in Jones’ family.

Jones was asked about one of his current projects — engaging with the 370 students at the Morton McMichael Elementary School.

“We were talking about galvanizing the community to raise funds to do that and to do community development, training and leadership at the school,” Jones said. “I have been doing it for years with coach Ken Hamilton and people like Bill Bagely. The idea of what we’re trying to do is to get these legends out to get an opportunity to affect kids.  So, we’re having a special dedication to those athletes. So, it’s something that’s in us, it’s our ministry as simple as that. We’ll be back here and raising funds so that we can educate people and reach out to kids at the school right in this neighborhood.”

As a former NBA champion, Jones has taken his message to playgrounds, community centers and elementary schools and has encouraged youngsters to work hard, respect others, and to reach out to mentors like himself who are willing to help them to achieve their goals.

“The one thing that we’re doing is creating All-Stars,” Jones said. “We were training kids for a couple of hours for career exploration. So, what we’re [going to] need is a lot of funding to do our year-round program, which will help up to train them and prepare them academically and to get them prepared to higher learning institutes. So, we’re trying to get kids and give them some hope — and that’s what we do.”

Legendary high school basketball coach and Shooting Stars Institute cofounder Ken Hamilton is glad that his friend and colleague Jones is being honored with the mural.

“It couldn’t have happened to a better person or it couldn’t happen to somebody that is warranted of it,” Hamilton said. “All of the things that he has done for the community, young people all his life. So, it’s very good to see that finally he’s getting his just rewards.”