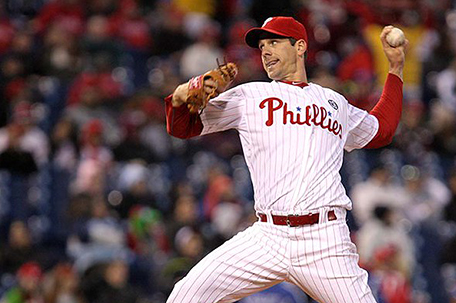 ABOVE PHOTO:  Phillies pitcher Cliff Lee strikes out 13 Atlanta Braves, but is on the short end of a 1-0 shut out.  (Photo by Webster Riddick.)

On a night when Cliff Lee was mowing down Atlanta Braves hitters, the Phillies offense was about as cold as the night time temperature.

That’s because the Phils couldn’t figure out the riddle that was Braves starting pitcher Julio Teheran (2-1). In nine innings, the Phillies could manage just three hits—all singles by Ryan Howard, Carlos Ruiz and Jimmy Rollins.

In what was an old-fashioned pitcher’s duel, the Braves came away with a 1-0 win over the Phillies in front of 23, 382 fans at Citizen’s Bank Park who saw Lee come up with 13 strikeouts while his offense struggled.

The only mistake Lee made in 128 pitches was giving up a home run on an 0-2 pitch to Braves catcher Evan Gattis, who was ripping up Phillies pitching the way his predecessor Brian McCann used to when he was the Atlanta catcher. It was Gattis’s third home run of the series. He had four hits in the game.

“On the pitch to Gattis, I tried to elevate a fast ball. It wasn’t a bad spot, but it wasn’t the spot I was trying to hit. It was down and in,” Lee said. “The pitch I made today was a bad pitch. I missed the spot I was going for and it ended up in a decent spot. He just put a decent swing on it. You gotta give him credit. I’ve got to be better than that. I should have thrown a different pitch or a different location.”

Pitching all nine innings, Lee definitely did his part to help the Phillies win this game. He scattered 11 hits and did a masterful job of pitching himself out of jams when the Braves had men on base. The effort Lee put out tonight was nothing short of amazing.

Meanwhile, Teheran wasn’t necessarily coming up with strikeouts, but he was getting the Phillies out and thanks to the wind blowing in from center field a few hard hit balls that might have gone out of the park on a hot summer day stayed inside the stadium.

Teheran had four strikeouts and no walks in 115 pitches. He kept the Phillies offense off balance by mixing his pitches effectively. Centerfielder Ben Revere said it was frustrating for his team to not be able to put runs on the board.

“(Teheran) was hitting his spots and everything, but that’s the way baseball goes,” Ben Revere said. “The guys hit the ball on the money, but it was right at their guys. It’s frustrating but we just got to keep our heads and come back out (Thursday).

“(Lee) pitched one heckuva game. It was phenomenal. Everybody in here is frustrating because your pitcher does so well and gets the loss.”

Teheran was perfect through his four innings before giving up an infield single to Howard. He gave up a pair of two-out singles, but the Phillies could not push a run across.

This loss to the Braves is just the kind of stuff that happens to average teams. They get a solid outing from their starting pitcher, but they can’t hit. Sometimes, the reverse happens. The Phillies score a lot of runs and then the bullpen or the starting pitching breaks down.

The Phillies have to figure out away to play every aspect of their game well—whether it’s getting clutch hitting, good starting and relief pitching. Phils manager Ryne Sandberg said the Phillies have do a better job of providing Lee with run support.

“That’s a trend that we don’t want to have because we know that he gives us a chance to win,” Sandberg said. “Things didn’t go our way on the offensive side with some hard-hit balls tonight.”

Braves get swept by Phillies