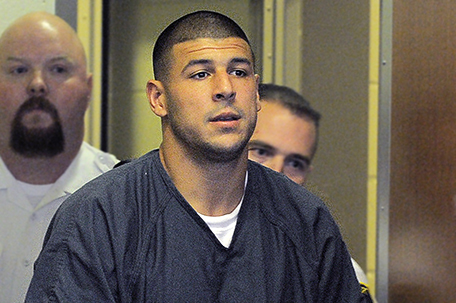 BOSTON —Aaron Hernandez’s lawyer said Thursday that the former New England Patriots star’s family is suing the team and the league after an examination revealed signs of a severe degenerative brain disease.

Jose Baez, the defense attorney who represented Hernandez during the former tight end’s second murder case, said a brain examination determined that the 27-year-old had a “severe case” of chronic traumatic encephalopathy.

CTE is a progressive degenerative disease of the brain found in people with a history of repetitive brain trauma, including football players, that can manifest itself as impaired judgment, depression and aggression. It can only be diagnosed after death, through an analysis of the structure of the brain.

“Aaron Hernandez had an advanced, stage 3 of CTE, which is normally found in the median age of a 67-year-old man,” Baez said.

Baez also announced that the legal team is suing the NFL and the New England Patriots on behalf of Hernandez’s daughter. Shayanna Jenkins, Hernandez’s girlfriend and the mother of his daughter, stood beside Baez as he made the announcement.

The lawsuit filed in federal court in Boston on Thursday claims that the team and league deprived Avielle Hernandez of the companionship of her father.

The lawsuit is separate from a $1 billion settlement in which the league agreed to pay families of players who suffered brain damage because of repeated head trauma while playing football.

Hernandez, who was convicted in his first murder case, hanged himself in prison in April days after winning an acquittal in a double homicide ca

A neuropathological examination of Aaron Hernandez’s brain was conducted by Dr. Ann McKee, Professor of Pathology and Neurology at Boston University School of Medicine, Director of BU’s CTE Center and Chief of Neuropathology at the VA-BU-CLF Brain Bank.

Based on characteristic neuropathological findings, Dr. McKee concluded that Mr. Hernandez had chronic traumatic encephalopathy (CTE), Stage 3 out of 4, (Stage 4 being the most severe). This diagnosis was confirmed by a second VABHS neuropathologist. In addition, Mr. Hernandez had early brain atrophy and large perforations in the septum pellucidum, a central membrane.

se. His death came just hours before the Patriots visited the White House to celebrate their latest Super Bowl victory.

A recent study found evidence of the disease in 110 of 111 former NFL players whose brains were examined.

Dr. McKee and the BU CTE team have extensive experience in the diagnosis of CTE and have contributed landmark publications on traumatic brain injury and CTE in athletes and Veterans. Her research has demonstrated that CTE is associated with aggressiveness, explosiveness, impulsivity, depression, memory loss and other cognitive changes.

We are grateful to the family of Aaron Hernandez for donating his brain to the VA-BU-CLF brain bank, located at the Jamaica Plain campus of the VA Boston Healthcare System.