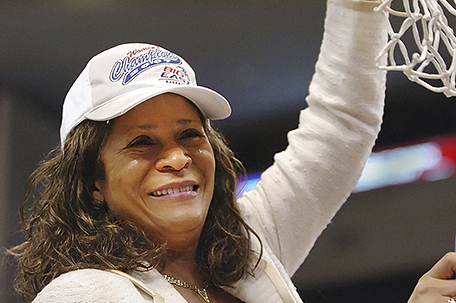 ABOVE PHOTO: Rutgers head coach C. Vivian Stringer celebrates by cutting down the net after her teams 55-47 win over Connecticut in the final game of the Big East women’s basketball championship at the Hartford Civic Center in Hartford, Conn., on Tuesday, March 6, 2007. Stringer has announced her retirement, Saturday, April 30, 2022, after 50 years in college basketball. She finished with 1,055 wins, fourth all-time among Division I women’s basketball coaches. (AP Photo/Fred Beckham, File)

In the fight to make sports equitable for women and girls, there have been many warriors.

Many of those warriors have been affiliated with the Black Women in Sport Foundation.

“It (Black Women in Sport) is something every young African American female needs to have in their lives,” said former Temple basketball star Marilyn Stephens. “As a student athlete, they were here for me, and they were my mentors.”

At its 30th annual Sneaker Ball Gala awards ceremony, the Black Women in Sport Foundation honored another warrior, Naismith Basketball Hall of Famer C. Vivian Stringer with its Living Legends Award for both her accomplishments as a coach and her commitment to racial and gender equity in sports.

While Stringer, who retired from Rutgers University after a 50-year-career that also included stints at Cheyney and Iowa, couldn’t attend the ceremony, she sent a video message thanking BWSF for the honor and thanking them for their support.

“We conceived of this idea of supporting one another a long, long, time ago and so I’m so grateful that you all stuck by each other, and we can come to have this vision …  Let me know how I can help because want to continue this idea of women coaches coming the classroom to the board room,” Stringer said in a recorded statement that was played during the gala.

That they honored Stringer with this award was fitting when you consider how closely tied her success as a basketball coach and commitment to fighting for racial and gender equity has been to BWSF’s mission in the last 30 years.

“We did a lot of advocacy work,” Sloan-Green said. “Vivian had that strong personality and we would go around getting people upset behind what they were doing. (Stringer) was the outgoing personality and I was the quiet storm.”

As a coach, Stringer amassed 1,055 wins and four Final Four appearances, including two with Rutgers. She is the only coach in men’s or women’s basketball to take three different teams to the Final Four and has an Olympic gold medal from her stint as an assistant coach with the U.S. Women’s team in the 2004 Olympics in Athens.

Stringer, in fact, led Cheyney to the first NCAA Women’s Final Four in 1982, defeating the University of Maryland Terrapins in the national semifinal before losing to Louisiana Tech in the National Championship game. The Lady Wolves were the first and only team from an HBCU to make it to a Final Four.

But if there was one situation that best exemplified Stringer’s career as a coach and as a vocal advocate for racial justice, it was what happened during Rutgers’ run to the 2007 national championship game.

Stringer’s Rutgers squad, which wasn’t expected to get through the first round, managed to upset the Duke Lady Blue Devils — the tournament’s number one seed — by a point in the second round on their way to the Final Four, losing to the eventual champion, the University of Tennessee’s Lady Volunteers.

While the women’s college basketball marveled at what was arguably one of Stringer’s best jobs, morning radio shock jock Don Imus disparaged the Scarlet Knights, referring to the team as “nappy-headed hoes.” Imus would eventually be fired by CBS for this combination of racism and sexism.

Stringer and the team met with Imus, who eventually apologized after listening to the players express the hurt caused by his remarks.

“These comments are indicative of greater ills in our culture,” Stringer said at the time. “It is not just Mr. Imus, and we hope that this will be and serve as a catalyst for change.”

It also served as inspiration for the next generation of African American coaches and athletes like Jazmine Smith, founder, and CEO of Eyekonz Sports League, which gives African American girls aged 5-15 the opportunity to participate in field hockey and lacrosse.

The advocacy and perseverance of Stringer, along with the advocacy of groups like Black Women in Sport, has done a lot to break down barriers for the current generation of African American women in sports.

(Stringer) broke the glass ceiling for coaches like myself and others to be able to carry on the torch,” Smith said. “Without her fortitude and not giving up through the various barriers and opposition that we don’t know about, we’re here because of her. We are standing literally on her shoulders.”

While there is still a long way to go in the fight for gender equity and racial justice, Stringer and Black Women in Sport have certainly made the world a little bit better than it was before.