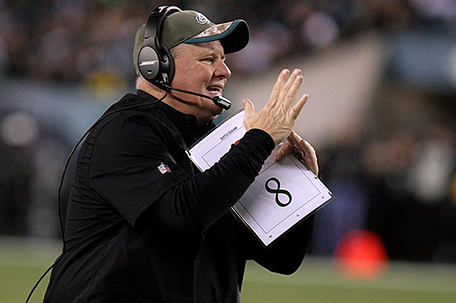 ABOVE PHOTO:  Eagles head coach Chip Kelly will lead the way in making personnel decisions for the Eagles.  (Photo by Webster Riddick.)

For The Chris Murray Report and The Philadelphia Sunday Sun

Now that Chip Kelly has assumed control of all the Philadelphia Eagles personnel decisions, the burden on him to win a championship has been increased exponentially.

Do you remember the results the last time an Eagles head coach had that much control over the players he could bring in?

The team had four trips to the NFC title game, and one Super Bowl appearance. It was also a team that consistently stayed under the salary cap, had a bizarre disregard for certain positions on defense and wide receiver position (except for one year with Terrell Owens), and had a front-office power struggle.

Under Andy Reid as head coach and head personnel guy, the Eagles were good, but were always a couple of pieces away from being a great team that could win a Super Bowl.

First and foremost, Kelly is going to have to find a general manager or player personnel guy that he can trust to find players that are going to fit the profile he wants for his team.

It’s the NFL’s equivalent of a guy in charge of recruiting at the collegiate level from something Kelly has experience with during his days at Oregon.

Kelly will be in charge of the draft, trades and bringing in free agents while Howie Roseman, who was promoted to vice president for football operations, will responsible for signing the checks.

Eagles’ owner Jeffrey Lurie hopes that Kelly and Roseman can be on one accord, unlike Reid and former team vice president Joe Banner. If there were a Salary Cap Bowl, the Eagles would have been the greatest of all-time. On the field, the Eagles were a very good team, but couldn’t get over that championship hump.

The first priority for Kelly as “the man” will be to re-sign free agent wide receiver Jeremy Maclin and restructuring LeSean McCoy’s contract.

Since he is now in charge of personnel decisions, suffice it to say he will be involved in making sure those guys stay in Philly.

Kelly would like to accomplish what New England’s Bill Belichick has accomplished as the man in charge of personnel with three Super Bowls. Seattle’s Pete Carroll, who also has say-so over the players he chooses, has the Lombardi trophy on his mantle as well.

Fans are hoping that Kelly, unlike his predecessor, will bring in guys who are going to make a real impact on the defensive side of the ball. In the draft and in free agency, defense should be a major priority.

Instead of bringing in projects like former Louisville linebacker Marcus Smith, Kelly needs to sign guys who are ready to make an impact now—whether it’s in the draft or free agency.

The Eagles need to get better in the secondary. Both cornerback Bradley Fletcher and Nate Allen are going to be free agents. I don’t think Kelly is going to move heaven and earth to get those guys back nor should he.

Not since Brian Dawkins or even Lito Sheppard and Sheldon Brown have the Eagles had a secondary that scared opposing receivers.

At the collegiate level , some of the highly –touted stars at defensive back include Michigan State’s redshirt junior corner Trae Waynes who played a lot of press coverage in the Spartans highly-touted defense the last two seasons, especially playing alongside Darquez Dennard, who had a solid rookie season with the Cincinnati Bengals.

NFLDraftScout.com has rated Waynes the No #1 cornerback in the country and he is expected to be taken in the first round. If he’s available, the Eagles should draft him.

Before his season-ending knee injury, Oregon’s Ifo Ekpr-Olomu was a finalist for the Jim Thorpe Award. Ekpr-Olomu was so proficient as a cover corner that opposing quarterbacks rarely threw in his area. He had nine passes defended and two interceptions.

Because of the injury, Ekpr-Olomu’s stock will probably fall, but don’t be surprised if ends up with the Eagles because of Kelly’s affinity for former Oregon players.

Florida State has two good prospects at cornerback; P.J. Williams (74 tackles, one interception) and Ron Darby, who didn’t have an interception this last year, but has the kind of speed for the cornerback position.

Top of the collegiate possibilities at the safety position are Alabama’s Landon Collins (6-0, 222) who has a reputation for being a heady, but physical safety, and Louisville’s Gerod Hollimon, a playmaking safety, something else the Birds haven’t had in a while.

In 2014, Hollimon had 14 interceptions by himself, more than the entire Eagles secondary this past season.

But if you don’t like the college guys, the pickings in the 2015 free agent class are slim. On some lists, New England’s Devin McCourty, who is considered a playmaker and has played at the cornerback position before switching to safety, is considered find.  He had a huge interception in last Saturday’s playoff against Baltimore and allowed just one pass for 17 yards. He had 68 tackles and two interceptions during the regular season.

At the cornerback position, New England’s Darelle Revis is the top cornerback out there. Seattle’s Byron Maxwell, who had 39 tackles and two interceptions playing along side Richard Sherman, will be on the free agent market.  The question is will it be worth it for the Birds to spend a lot of money for that position?

Kelly, Roseman and Lurie will all have to be on the same page—Easier said than done if you believe all the rumors of an apparent between Roseman and Kelly.