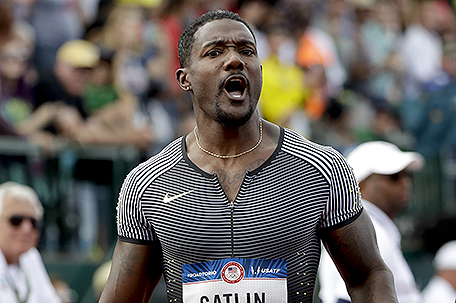 By Pat Graham and Eddie Pells

RIO DE JANEIRO (AP) — It didn’t take long for Justin Gatlin’s name to get dragged into the doping drama swirling at the Olympics.

No big deal to Gatlin.

The sprinter considered the best threat to stop Usain Bolt in the 100-meter final Sunday told The Associated Press he’s not paying attention to what people are saying about him, and is not concerned with those who think he doesn’t belong here.

“At the end of the day, the time has been served. I’ve served that time,” the 34-year-old Gatlin told AP on Wednesday. “I’ve dealt with that punishment. I’ve moved forward.”

Not everyone else has.

Gatlin, who won gold at 100 meters at the 2004 Olympics, has been caught using banned substances twice. The first was for amphetamines, though arbitrators determined he didn’t use them for doping but to treat attention deficit disorder. The second came for excessive testosterone in 2006 and resulted in a four-year ban.

His name almost always comes up in the debate over how past dopers should be treated. In Rio, it surfaced in the wake of American swimmer Lilly King’s finger-wagging display toward Yulia Efimova, the Russian who was allowed to compete after a last-minute appeal to the Court of Arbitration for Sport.

Like Gatlin, Efimova has served a doping ban but was reinstated.

But in refusing to bar the entire Russian team from the Olympics after investigations detailed state-sponsored doping in the country, the IOC put in a special caveat: Any Russian who had been previously banned for doping was not welcome.

That rule was overturned by CAS, which had made similar decisions in previous cases, saying athletes can’t be punished twice for the same offense.

King’s criticism of Efimova — and her icy stares toward the Russian before the two squared off in the pool — instantly made King a voice in support of clean athletes everywhere.

The dispute led to King, and many others, being asked if it was fair that Gatlin was competing.

“Do I think people who have been caught doping should be on the team? They shouldn’t. It is unfortunate we have to see that,” King said.

But, King said, she had to respect the rules.

Same with sprinter Michael Johnson, the four-time Olympic gold medalist, who was asked whether Gatlin should be here.

“The issue people need to understand is that you’re not going to solve the problem by pointing the finger at an athlete and making that athlete the villain,” Johnson said, talking in general about athletes with violations.

“The athlete has been a villain and certainly has done damage to the sport. … I don’t appreciate that. But the athlete’s not the one that’s making the rules that allows him to get back on the track or back in the pool, or back on the field.”

Gatlin does not see himself as a villain — and does not buy into the now-hackneyed portrayal of him vs. Bolt as track’s version of “Good vs. Evil.”

Though many of the headlines deride him, Gatlin insists he’s popular in the athletes village.

“So many people have come up to me in the village and the cafeteria, showing me love, wanting me to go out there and do the best, be the best,” he said. “Taking pictures and everything. I get love, man.”

How will the fans — and media — react when he hits the track Saturday for the start of the men’s 100?

“I’ve worked hard, all the way from the bottom when I had nothing,” Gatlin said. “I worked hard to work back to where I’m at now. I don’t understand. The system has worked. I think people need to stop looking at trying to be the judge, the jury and executioner and let the system do its job.”