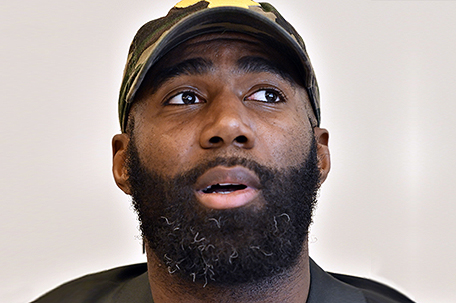 In the wake of a rescinded invitation to the White House, Philadelphia Eagles safety Malcolm Jenkins opted for his own kind of symbolism.

So he decided to do his best Bob Dylan imitation during a press scrum with reporters after the team’s first day of organized team activities at the Nova Care Center on Wednesday.

Instead of answering questions about President Donald J. Trump’s cancellation of the Super Bowl champs’ visit to the White House, a visit that was probably cancelled because it wouldn’t produce the desired photo op, Jenkins held up a series of handwritten placards that focused on police brutality and mass incarceration.

That’s right. He didn’t utter a word. He performed his own version of Dylan’s “Subterranean Homesick Blues” instead.

When reporters kept asking questions about the White House and President Trump, Jenkins held up a sign that said: “You Aren’t Listening.”

Come to think of it, Jenkins could have directed this particular sign towards Trump and the folks at Fox News, because no matter how many times players like Jenkins and others tell these entities and their fellow travelers that the NFL players who participated in protests last year were battling mass incarceration and police brutality and not the military and the flag itself, they refused to listen.

It was a frustration that Jenkins has been expressing most of the week, starting with a statement he released on Twitter.

“It’s hard to meet with people who don’t agree with you and to have tough conversations about uncomfortable race-related issues and how to make positive change,” the statement said. “It takes empathy to listen to other’s experience that may be different from your own. It takes courage to stand up for the TRUTH even if it’s not a popular one. We are athletes, but as citizens, we are doing everything in our power to make our communities better. This is the hard, but right thing to do. Everyone, regardless or race or socioeconomic status deserves to be treated equally. We are fighting for racial and social equality.”

“Instead the decision was made to lie and paint the picture that these players are anti-America, anti-flag and anti-military,” Jenkins continued. “We will continue to give a voice to those who never had one.”

That last part was in reference to Fox News’s claim that the Eagles were among the teams that took a knee during the season. They even had video to prove it.

Too bad that video was of the team kneeling in prayer before the game. Fox News had to apologize, but they had made their point for their audience of one, President Trump.

In fact, despite Trump’s decision to commute the sentence of Alice Johnson, a 60-year-old grandmother sentenced to life in prison for a non-violent drug offense, his so-called Justice Department is dedicated to putting as many people in jail as possible and making sure that anything closely resembling police accountability never materializes.

Though Jenkins has never hesitated to speak directly to reporters on the issue of police brutality and mass incarceration at his locker after games, his decision not to speak showed just how frustrated he and the other players have become with the way that the media has allowed Trump and company to frame the issue.

It’s also allowed them to ignore some things that shouldn’t be.

“I don’t feel like the work that these guys are doing in the community should be hijacked,”Eagles defensive end Chris Long said. “I think Malcolm does a tremendous [job] of advocating for issues like social justice and criminal justice reform. It is hard for some people who aren’t affected by the figures [Jenkins] is talking about, some of the legislation that have existed for a long time in our country. They don’t want to hear about it because they don’t know about it. It doesn’t affect them.”

According to a CNN report, Trump intends to hammer the NFL over its players desire to see police accountability and the end of mass incarceration as part of his strategy to help Republicans keep control of the House and Senate in the midterm elections.

The only way that this strategy won’t be successful is if the American public understands that it is a distraction.

Maybe Malcolm Jenkins and his signs can show us the way.