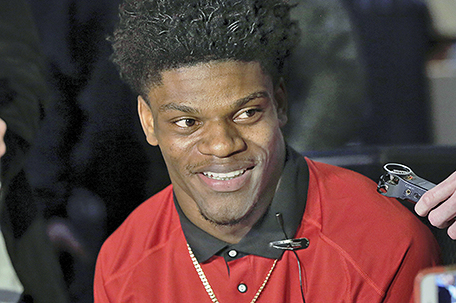 Baltimore Ravens quarterback Lamar Jackson helped his team become the AFC’s number one seed in the playoffs. But can he get them to the Super Bowl?

Owings Mills, Md.— For all the rave reviews and the talk of having revolutionized football that Baltimore Ravens quarterback Lamar Jackson has received during the 2019 regular-season, the big question for the former Louisville star could get answered this weekend.

Can he lead them to a Super Bowl?

Jackson, the odds-on favorite to be NFL’s Most Valuable Player, has a tough task ahead of him in the Ravens AFC Divisional Playoff matchup against a very physical Tennessee Titans squad looking to spring a huge upset Saturday at M&T Bank Stadium in Baltimore.

In a season where he’s been mobbed by children at a local mall, named an All-Pro and starred on just about every highlight reel on every sports media outlet from ESPN to YouTube, Jackson said he is focused on the single goal of a Super Bowl win.

“It’s cool, It’s cool … I’m just trying to work. I want a Super Bowl,” Jackson said. “All the accolades and stuff like that, I’ll cherish that, but I’m trying to chase something else right now. … I’ve been wanting a
Super Bowl since I was a kid. That’s why I play the game because I want to win.”

Throughout the season, Jackson has become the ultimate weapon as a duel-threat quarterback with record-setting numbers. In his first full season as a starter, he set an NFL record for rushing yards in a single season by a quarterback by gaining 1,206 yards, breaking a record held by former Philadelphia Eagles quarterback Michael Vick.

“The new era that we’re in now in the NFL, he knows his matchups,” said Ravens veteran safety Earl Thomas, who won a Super Bowl ring with the Seattle Seahawks in 2013. “He uses the big tight ends, throws where only they can catch the ball and we all know what he can do once he starts to run.”

When the season began, more than a few NFL experts wrote Jackson off as a “running quarterback”, but he’s changed the minds of many in that regard. Jackson passed for 3,127 yards, completed 66.1 percent, was third in the league in quarterback rating, and led the league with 36 touchdown passes.

Ravens head coach John Harbaugh said Jackson’s running ability and his knack for getting the ball in tight spaces really helps the Ravens in the red zone.

“He can also extend the play, hold the ball, move if he has to and he’s really done well with that,” Harbaugh said.

Jackson’s teammates like wide receiver Willie Snead IV said Jackson is driven by a desire to win and will take all the necessary to get there like working with his receivers after practice and during the offseason prior to training camp.

But the true worth of Jackson’s season will be having to do it under the spotlight of a single-elimination playoff run where every opposing coach, including Saturday’s opponent, has seen him on tape and is scrutinizing his every step, hoping to find some weakness in what he does to exploit throughout the course of the game.

He’s ready for anything the Titans throw at him, Jackson said.

“I’m not a rookie anymore, I’ve been around. I’ve seen everything that they can bring …  And we’re going to see it,” Jackson said. “Can’t start too late. You have to attack fast. It doesn’t really matter what quarter is, first or second, you have to attack. You have to finish the game strong. You can’t just go into the game playing half-assed.”

During the team’s organized teams last spring, Jackson said Ravens defensive coordinator Don “Wink” Martindale has been testing him in practice by throwing a number of blitzes and disguised coverages at him.

“(Martindale) used to disguise crazy blitzes during OTAs and stuff like that, and it just helped me a lot, knowing where guys would be and knowing the area of the field. I just have to get the ball out where my receiver can get it or no one can.”

Ravens backup quarterback Robert Griffin III said the Ravens coaching staff has done a good job of preparing Jackson for any kind of wrinkle the Titans or any other teams will throw at him during the course of the game.

“Whatever they play we can adjust to that in-game so we’re not sitting ducks like ‘they played man-to-man all season and now they’re playing zone, what are we gonna do?’ Griffin III said. “When you do put stuff on tape and teams do something to take that away, you can adjust to give them a new problem.

“I think that’s what we’ve done all year (with Jackson). We continue to give teams new problems with Lamar running, Lamar throwing, our receiver packages, our tight end packages, jet sweeps … we keep giving teams new problems. …We want to be the math that they can’t figure out.”

“Other than try to tie (Jackson’s) shoelaces together, not many people have had success,” Vrabel said with a little tongue and cheek during a phone interview with the Baltimore-area media. “We’ll have to prepare and try to get our players as ready as possible to defend not only him, but (running Mark Ingram and Gus Edwards.”

If you want to see what happens, catch the game on Saturday night at 8pm on CBS-3.

No ordinary Joe: Flacco wants to prove he’s among the NFL’s best QBs