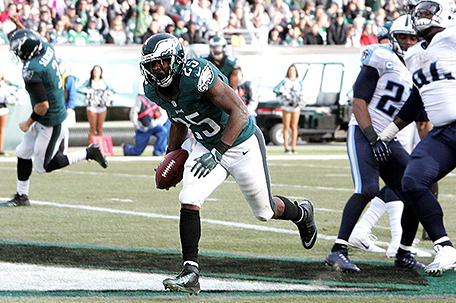 ABOVE PHOTO;  LeSean McCoy scores a second quarter touchdown with in the Eagles win over the Tennessee Titans. (Photo by Webster Riddick.)

With five games left in the regular season, the Philadelphia Eagles (8-3) have arrived at the point in the season that will determine where they will be in January.

The Birds Thanksgiving Day tilt with NFC East rival the Dallas Cowboys at AT&T Stadium will be their first test of their run to the playoffs. The Eagles will face the Cowboys in two of their next three games with the defending Super Bowl champion Seattle Seahawks sandwiched in between.

The Birds and Cowboys come into Thursday’s game tied for first-place in the NFC East. Dallas (8-3) is coming off a huge come-from-behind road win over the New York Giants.

“We really have to go in this week really focused,” said running back LeSean McCoy, who gained 130 on 21 carries and one touchdown in Sunday’s win . “It’s a short week. It’s a big game, Thanksgiving is coming up and it’s a division game at that. So I think you that add all those things up, it’s a must win type of game.”

After that gauntlet of tough games, the Eagles will close out the season with two road games against Washington (3-8) and the New York Giants (3-8). While those two teams aren’t necessarily setting the world on fire, divisional matchups are never easy and should never taken for granted.

Even though players and coaches like to tell you they are not looking beyond a team, they also recognize that every game from this point forward will have some sort of postseason implication—whether it’s for a division title or a wildcard berth.

“Every week is a one-game season and we take it like that,” said Eagles safety Malcolm Jenkins. “But really the games start to count a little bit more as you get to December and the end of November. Usually they have implications on the division and playoff positioning.”

“If you don’t want to look at the big picture, you still take it week by week, your preparation from a physical and mental has to be ramped up as the season gets on. As your body gets weary, you have to fool yourselves and turn it up even more.”

The Birds managed to bounce back from a horrific loss to the Green Bay Packers by coming away with an easy  43-24 win over the Tennessee Titans Sunday at Lincoln Financial Field.

While it wasn’t necessarily an artistic masterpiece over an overmatched team, the Eagles will take a win to stay in first place after the way they were shellacked by the Packers at Lambeau Field.

“It was a buzz saw situation that we ran into, but we understood that this week that we couldn’t afford to lose this one,” said Eagles cornerback Cary Williams. “It was a bounce-back game and a must-win game for us.”

The Eagles playoff hopes will depend upon how well quarterback Mark Sanchez plays down the stretch. In the win over Tennessee, Sanchez 30-of-46 passes for 307 yards with a touchdown and two interceptions.

In his last three games as the Eagles starting quarterback, Sanchez has eight turnovers. With the Eagles season riding on his shoulders, Sanchez has to avoid mistakes if the Birds win the division. That was something he talked about after the win over the Titans.

“If you squander too many opportunities, you might miss out on the playoffs,” Sanchez said. “For anybody to be successful, we have to take care of the football. We can’t be on the wrong page and I can’t miss the ball down the field to Zach (Ertz).”

Eagles hold off Cardinals, move into a first-place tie with Dallas