It’s official: The Atlantic City Seagulls men’s basketball team is back for its first pro season 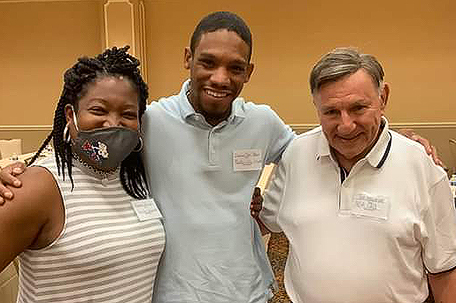 It’s now official — Atlantic City has a new professional men’s basketball team.  Everybody is excited about the great news!

Semi-pro basketball is back in Atlantic City for the first time in over three decades since 1996. That team was also called The Atlantic City Seagulls, and they played six seasons in the United States Basketball League. The team won three consecutive league titles between 1997 and 1999 for the Mid-Atlantic Division with Kevin Mackey as the head coach.

First it was a dream, but now it’s reality. Early this summer, The American Basketball Association (ABA) was proud to announce the team’s rebirth.. On July 6, the new Atlantic City Seagulls team owner Darren “Slim” Akers and team general manager Lenny Cooke had an hours long meeting with Atlantic City Mayor Marty Small Sr. about plans to reintroduce the team to the people of Atlantic City.

Once the meeting was over, Small made it known to his staff that he was excited about having the Seagulls back in the city and that the team will have his full support.

The meeting also brought a big smile to Akers’ face — he was the person who had the meeting with the ABA and moved his Yeadon Kings basketball team to Atlantic City.

“I decided to move the team to Atlantic City because it looked like the right move,”  Akers said. “Yeadon is a beautiful town and I’m sure the people of Yeadon would have appreciated the Kings, but I just saw a bigger stage for the players and a bigger opportunity in Atlantic City to continue the team’s legacy. It also gives the beautiful city of Atlantic City something else to be proud of. I just saw a perfect fit to a perfect situation. I saw a bigger picture surrounding the basketball team. Today, I’m really excited about this opportunity.”

Last week, a major meeting was held in Las Vegas for all the ABA owners. Akers was among that large group of owners. He had productive conversations with Northeast Division Chairwoman Marsha Blunt and ABA CEO Joe Newman as they laid down plans for a successful basketball season.

Since meeting with Small, the Atlantic CitySeagulls have hired several people to join their pro-basketball organization. One of the first people they hired was Valentino C. Thompson as their head coach. Akers believed Thompson would bring a winning tradition to the Seagulls’ basketball program. But before Thompson was hired as the team’s head coach, they brought aboard Chris “Skorch” James for the team’s director of game day entertainment.

In addition, the Seagulls also named Melina Johnson as the team’s head trainer and medical supervisor. Johnson will be responsible for taking care of all the players’ medical needs.

About a week ago, the Seagulls held cheerleading tryouts for young women between 18 and 40 years old at Atlantic City Dolphins Field, for the basketball team. Brittany Tavares was hired as the team’s cheerleader coordinator and head coach. During the tryouts, a good number of women were chosen for the squad.

With the start of the ABA season only three months away, plans have been set for team tryouts beginning September 27 from 6 p.m. to 9p.m. and September 28 from 12 noon to 4 p.m. All players are urged to report to Pleasantville Recreation Center, located at 300 Brighton Avenue in Pleasantville, New Jersey. Once the team roster is completed, the people of Atlantic City will wait for the start of an exciting basketball season.