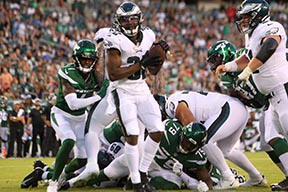 While the Philadelphia Eagles may have lost their opening preseason game to the New York Jets team that’s completely rebuilding, the game gave fans and coaches a lot to consider.

The Philadelphia Eagles’ first drive of their preseason game against the New York Jets, a team that finished in last place in the AFC East, should not excite anyone to the point where folks are talking about the Birds as Super Bowl contenders.

Even though the Eagles ended up on the short end of a 24-21 loss in a game where the final score wasn’t really all that meaningful, there were some interesting things that came out of the game.

What you did see was a very sharp performance by Eagles quarterback Jalen Hurts. The former Oklahoma/Alabama star completed all six of his passes for 80 yards including a 22-yard touchdown to tight end Dallas Goedert to give the Eagles a 7-0 lead.

Any possibility that Hurts would get to engineer another scoring touchdown drive was quickly dashed when Jets defensive tackle Quinnen Williams delivered a vicious, out of bounds hit on Hurts.

That play resulted in a 15-yard personal foul against and a big scare for Eagles fans while drawing the ire of Sirianni, who appeared to be screaming at Williams on the sidelines. Meanwhile, Hurts showed his toughness on that drive and kept things moving to eventually lead the Eagles to their first touchdown.

“It happens,” Hurts said. “He hit me late, they called a flag and we moved on.”

You also got to see Hurts use some of his mobility in his only drive of the game. On his first pass of the game, the Jets’ pass rush forced Hurts to scramble to his right but instead of running down field, he found a wide-open Watkins for a 28-yard gain.

“In hindsight, there are a lot of guys in the league that do a lot of special things from the pocket, and I think I can do those things,” Hurts said after the game.

Along with passing on the run, Hurt showed people that he is always a threat to tuck it away and run with it as well. He ran up the middle of the Jets defense for a 12-yard touchdown run that was nullified because of a holding penalty.

Running back Jason Huntley had a decent night at the running back position and as a kick returner.  On the ground, Huntley gained 48-yards on 16 carries with one touchdown. He also had three catches for 15 yards.

It was Huntley’s kick-return skills that raised a few eyes when he returned a kickoff 42 yards. Jets kicker Braden Mann kept Huntley from taking it the distance for a touchdown.

The Eagles’ effort on the defensive end was nothing to write home about, but it wasn’t all that bad, either.  Veteran linebacker Kyzir White had an interception inside Jets territory in the first quarter that set up the Eagles second touchdown of the game.

“I was just a whole player, and I was playing visual on [Jets quarterback Zach Wilson,” White said. “I saw it in his demeanor and where he was going with the ball. I just to sprint and make a play on it.”

“Yeah, I’m always excited to have Nakobe behind me,” Davis said. “If I mess up, he’s going to clean it up and always having him behind me I can do no wrong.”

With all the new pieces on the defensive side of the ball, veteran defensive end Brandon Graham said this team is still working to establish its identity.

“It’s still early to tell because that was our first time in action and it was promising from what I’ve seen,” Graham said. “We’re trying to figure that our now…but I do like the step we have taken.”

The Eagles play their next preseason game against the Cleveland Browns on Sunday, Aug. 21 at First Energy Stadium. You can catch the game at 1p.m. on NBC-10.