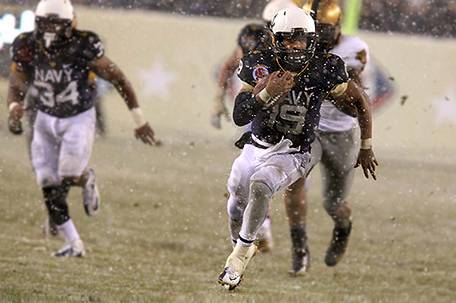 ABOVE PHOTO: Navy’s Keenan Reynolds set a new record for rushing touchdowns by a quarterback.

You have to figure at some point that Army is going to beat Navy and reverse a losing streak that is in double digits.

Unfortunately for the Black Knights, the 2013 edition of the Army-Navy game was just like the last 11 games before this one—a win for the Midshipmen.

Led by quarterback Keenan Reynolds, Navy came away with a 34-7 win over Army on a cold, snowy day at Lincoln Financial Field in the 114th matchup of the nation’s service academies. The Black Knights ended their season at 3-9 while the bowl-bound Midshipmen improved to 8-4 and won the Commander-in-Chief Trophy for their wins over Army and Air Force.

In a game that started with snow and ended in freezing rain, Navy head coach Ken Niumatalolo said he liked how his team played well on a day when conditions weren’t so perfect.

“The only thing that reminded me of Hawaii was this lei (around his neck), it definitely wasn’t Hawaii weather,” Niumatalolo said. “I thought our kids played well. We stayed outdoors during our time. We tried to get used to the elements. It was a tough situation out there, but I was just very pleased with all of players. We shut down a very good Army offense.”

Navy, a team headed to the Bell Helicopter Armed Forces Bowl on Dec. 30, was simply too much for a game, but overmatched Army squad.  For one thing, they couldn’t stop Reynolds, who gained 136 yards on 30 carries and three touchdowns.  Navy rolled up 343 yards rushing yards in Arctic-like conditions.

“It was fun, kind of storybook Army-Navy game, cold, snowing, grind it out kind of game,” Reynolds said. “You couldn’t ask for too much better.”

“Coming into the game I wasn’t too concerned about the record,” Reynolds said. “If I broke it, I broke it. If not, oh well. My main concern was trying to get the “W.” If that involved getting zero touchdowns and everybody else running and having a field day then I was cool with that.”

Given Reynolds success this season, Niumatalolo said his quarterback deserved to be in New York at the Downtown Athletic Club for the Heisman Trophy announcement. He said Reynolds is just as good as 2013 Heisman Trophy winner Jameis Winston of Florida State.

“I think he deserves to be there,” Niumatalolo said. “He’s as good a quarterback that I’ve been around. Not to take anything from the guys who are there, but I think Keenan had a pretty good year, too.”

Navy jumped out to a 17-0 lead at halftime on a 39-yard touchdown run by fullback Noah Copeland and a 47-yard run by Reynolds in the second quarter. The Midshipmen opened the scoring in the first quarter with a 20-yard field goal by sophomore kicker Nick Sloan.

“The first thing you have to do in a game like this play without errors, delays and turnovers,” said Army head coach Rich Ellerson. “If you’re going to have a chance against a team like Navy, you have to be on the other side of the ledger when it comes to turnovers.”

Even though Army moved the ball into Navy territory at times during the first half, the Midshipmen’s defense made sure they stayed away from the red zone. They held an Army squad that averaged 323 yards per game to 157 yards.

“I think that epitomizes our defense,” said senior inside linebacker Cody Peterson. “We keep fighting, we keep plugging away and we find a way to make a play and not let them get in the end zone. They might get past the 50, but we’ll bow up and we’ll make sure they don’t get any points on the board.”

But that’s as close as Army would get as Navy went on to score the game’s final 17 points. Meanwhile, Ellerson said his team played valiantly despite the losing for the 12th straight time to Navy.

“I love that football team. That is a great team and a great senior class,” Ellerson said. “I want desperately for them to have a better feeling today. That’s what is killing me.”