Injuries give Barner the chance to shine 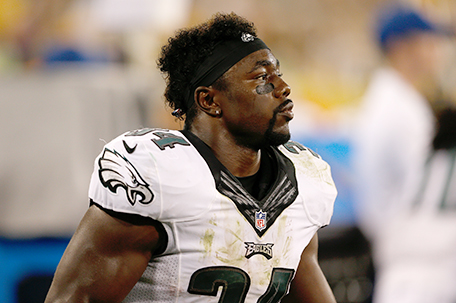 ABOVE PHOTO:  Philadelphia Eagles running back Kenjon Barner (34) looks on from the sidelines as he watches the action on the playing field during a preseason NFL football game against the Green Bay Packers on Saturday, August 29, 2015 in Green Bay, Wisconsin.  (Scott Boehm via AP)

With Ryan Mathews and rookie Wendell Smallwood on the shelf nursing minor injuries, running back Kenjon Barner has been getting extra reps in practice in their absence.

Barner’s all-around game as a running back has been impressing Eagles coaches since the beginning of minicamp. On a team that’s looking for someone to be the featured back, Barner has been turning the heads of head coach Doug Pederson and offensive coordinator Frank Reich.

“Kenjon [Barner], I think is a really good, all-around back. He can make you miss in the open field,” Reich said.  “I like his vision. He’s doing great in protections. I’ve been very impressed with him the whole offseason. Of course, when we got here everyone was in my ear about how good this guy is going to be a player, and that’s what we’re seeing.”

Since his days at Oregon, Barner has always had the speed and elusiveness needed to be a good running back. Last season, Barner got some time at running back and had one 19-yard run. During last year’s preseason, he showed flashes of what he can do in the open field with a couple of long punt returns.

When former head coach Chip Kelly brought Barner to Philadelphia in a trade with Carolina, he was seen as another one of the guys who was familiar with Kelly’s offense and some even expected him to be gone once Pederson arrived.

But Barner is definitely on the new regime’s radar and it likes what it sees.

“He’s an explosive guy with the ball in his hands, and he’s pretty good out of the backfield as a receiver,” Pederson said. “I love the fact that anytime you put the ball in his hand, he has the ability to make some big plays for you. He’s shown that here in the first week of camp.”

With Smallwood and Mathews not on the field, Barner is getting valuable time in front of the team video camera so the coaching staff can evaluate his progress.

“I thought he handled it well. His conditioning is good. It’s improving,” Pederson said. “He got a little tired towards the end of practice, but, again, that’s just the nature of the camp practice. Overall, I thought he did a good job. This will be a good film for him to watch: a good practice tape for him to watch to be able to make the necessary corrections. He’s headed in the right direction.”

Prior to training camp, Barner told philadephiaeagles.com that he has spent the offseason doing everything from changing his diet to working on his footwork.  He said he wants to do everything he can to put himself in the position to compete with the other running backs.

“It’s about me wanting to be the best me I could be, and I knew that in order to do that, I had to take the necessary steps,” Barner said back in June. “I lost a lot of body fat, gained muscle mass. It was a lot different than what’ve I done I in the past.”

Barner said he hasn’t had any difficulty learning Pederson’s offense during the course of mini-camp, something that’s coming through in the first week of training camp.

For him, it comes down the basics of being an NFL running back.

“Your job is to run the ball, make the right cuts, catch the ball out of the backfield and block,” he said. “The scheme may be different, but my mindset is the same.”