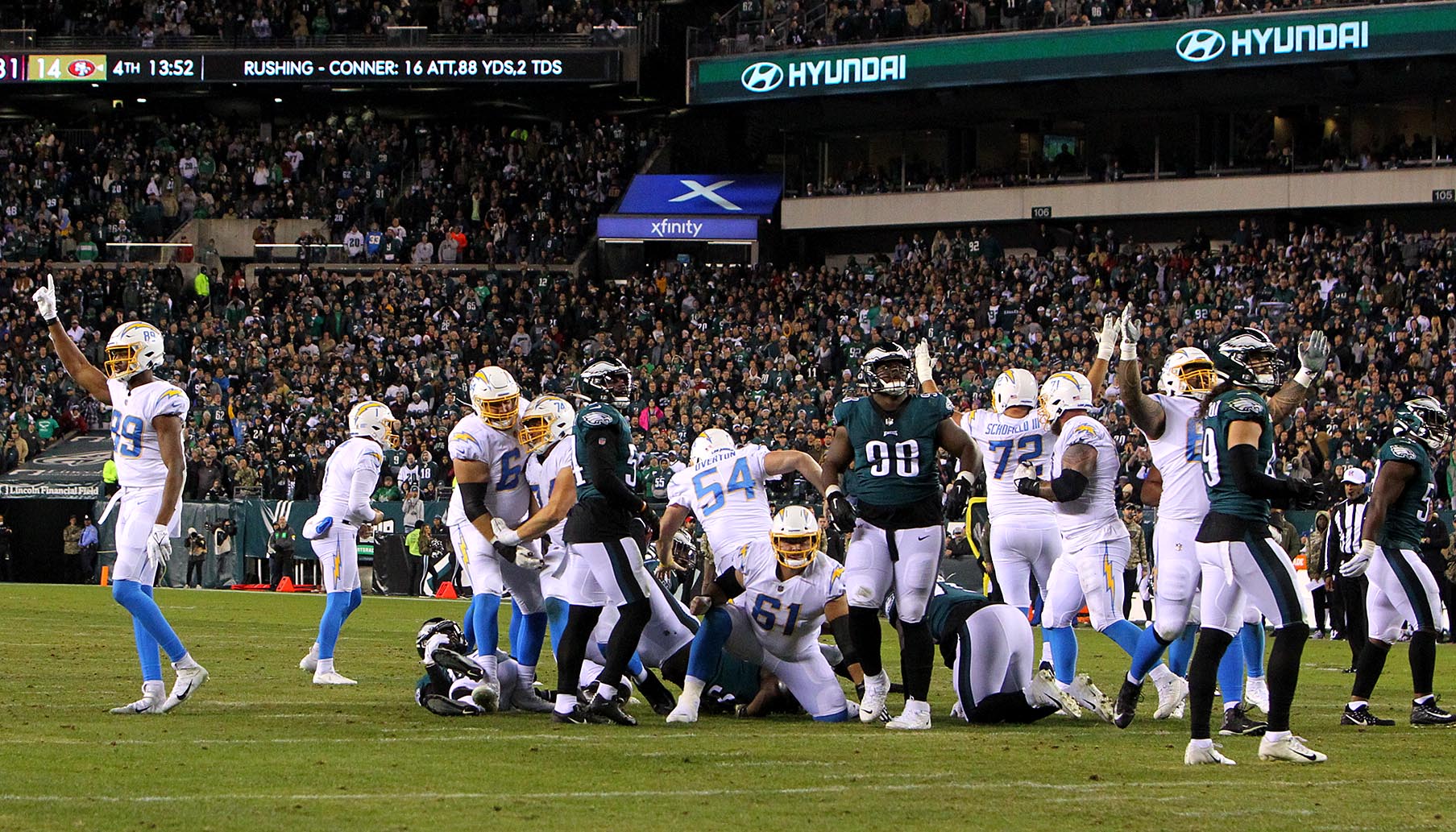 That’s what the Los Angeles Chargers were for the Philadelphia Eagles on Sunday.

In the aftermath of Sunday’s 27-24 loss to the Los Angeles Chargers at Lincoln Financial Field, Philadelphia Eagles fans will no doubt be looking for someone to blame for the latest entry to the team’s 3-6 record.

But if they’re pointing fingers, they need to make sure that they’re in the direction opposite of Jalen Hurts and the Birds offense, which did everything it could to win.

However, the same can’t be said for the defense. The Eagles defense didn’t lay a glove on Chargers quarterback Justin Herbert, who completed 32-of-38 passes for 356 yards and two touchdowns. They also allowed the Chargers to amass 445 yards of offense and failed to stop them on key third-down situations.

The Chargers ultimately won the game on a 29-yard Dustin Hopkins field goal with two-seconds left in the game. That’s because the Eagles defense had no answer for Herbert and the Chargers offense after the Birds offense came back to tie the game. There were no sacks, pressures or even hits on the opposing quarterback, except for one questionable roughing the passer penalty.

In this game, the Eagles offense had arguably its most balanced effort on offense. The Birds rushed for 176 yards with someone other than Hurts leading the team’s rushing attack. Veteran running back Jordan Howard gained 71 yards on 17 carries and one touchdown. Boston Scott added 40 while Hurts added 61 yards on 10 carries.

Speaking of Hurts, he had an outstanding performance running the Eagles offense in a losing effort. He was efficient in the passing game, completing 11-of-17 passes for 162 yards and one 28-yard touchdown pass to rookie wide receiver Devonta Smith that tied the game at 24-24.

Hurts made plays with both his arm and his legs, especially on the Eagles drive to tie the game. On third down conversions when the Chargers defense came with everything including the kitchen sink, Hurts used his legs to sprint from danger so that the offense could live to keep the chains moving. That drive was capped by his game-tying pass to Smith, who caught five passes for 116 yards.

“He just was really unfazed by the scenario and just showed a lot of poise,” said Eagles head coach Nick Sirianni. “Down seven, everything in his eyes said put it on me and let’s go, let’s keep running the ball, let’s keep play-action it, make sure we are converting on third down.

“And he made some unbelievable plays on third down. …He just was really composed in a tight situation. That’s what you want out of your quarterbacks. That’s what I’ve seen out of good quarterbacks in my past.”

For all of his critics who question his accuracy as a passer, Hurts is demonstrating what he can do with the football when he has a running game against a defense that’s not expecting pass on on every down.

When Hurts could firmly plant his feet into the ground and make throws without duress, he found open receivers. He would have had two touchdown passes in the game if a wide-open Dallas Goedert doesn’t drop a long bomb that hit him right in his hand on the Birds first drive of the game.

To his credit, Hurts is not into moral victories or patting himself on the back for a good performance in a losing effort. For him, a solid effort means nothing unless he gets the “W.”

The Eagles will try and win their fourth game of the season on Sunday when they take on the Denver Broncos at Mile High Stadium.