In Praise Of Knucklebones 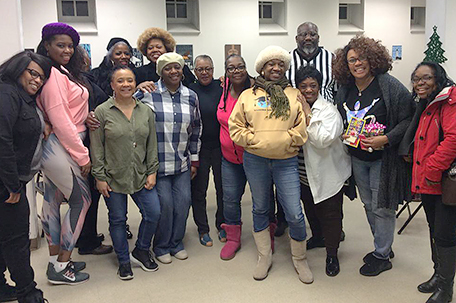 A group of ladies took it to the floor… and the table… for a hearty game of jacks last Saturday.

In the room at the Cobbs Creek Environmental Education Center in Southwest Philadelphia, Terrance Johnson stood out in his black and white striped shirt and the whistle around his neck.

Usually, Johnson only wears this outfit for the basketball games he referees. But last Saturday, he had another assignment.

He was refereeing a jacks tournament. That’s right, jacks. The metal things that looked like stars that folks would often use a ball to attempt to pick up.
“I’ll be looking for illegal touches and the other simple stuff, like trying to use two hands,” Johnson said.

But how would it compare to watching young men run up and down the court?

“[The boys] are not as competitive,” Johnson said. “Not hardly.”
About 20 women, most of them no younger than 35, gathered at the Education Center for a friendly, yet competitive game of jacks.

The women came from all walks of life.

Some were retirees. Others educators. Still others political consultants, attorneys, and even a legislative chief of staff.

Shortly after the 2016 Presidential elections, tournament organizer Alicia Burbage noticed a sense of unease among her friends.

Like many Americans from marginalized communities, they were concerned about the adversity they might face with Donald Trump in the White House.

“People started sharing their childhood memories of playing jacks,” she said. “Then people started selling woof tickets. I had a place where we could have a tournament, so I said let’s get it! A woman named Gloria Chaplin who was also a jacks player said she was in and asked if she could help organize it. Fifteen people signed on and 14 people showed up.”

Referee Johnson monitored the action as one group of women played on a table and another played on the floor.

The action was fast and furious as the air was peppered with such phrases as “a kiss (two jacks intertwined) is !” and “no using two hands!”

The clink of jacks hitting the floor and balls bouncing also filled the air.

That is, if you could hear it over the trash talking.

“This is one of my favorite childhood games,” she said. “I’ve always loved jacks.”

Praise Is The Cure Presents the 11th Annual Week of Hope, Health & Healing