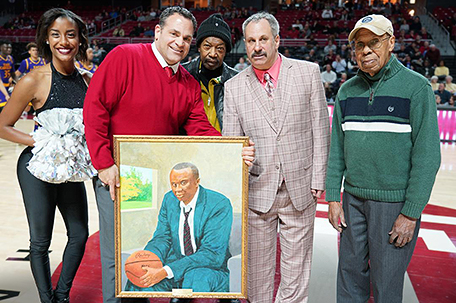 From 1982 to 2006, John Chaney roamed the sidelines of McGonigle Hall, and later the Peter Liacouras Center, as the head coach of Temple University’s Men’s Basketball team.

As the Head Owl, Chaney won 516 games and led the team to the NCAA Tournament’s Elite Eight five times.  While he was the head coach of Cheyney State University’s men’s basketball team in 1978, Chaney led his team to a Division II National Championship.

Although he has been out of the men’s basketball game for the last 11 years, Chaney’s shadow as one of the city’s iconic basketball legends continues to hover over Temple’s North Philadelphia campus in much the same way that the Empire State Building looms over New York. The restless energy, passion, discipline and his tendency to give offending referees and players his so-called “One-eyed Jack Stare” are still part of local basketball lore.

A myriad of photographs has captured Chaney’s intense game-time persona.

Now, a new image of the Hall-of-Fame coach will be reflected in a new painting that will hang on Temple University’s main campus.

The portrait of John Chaney was recently unveiled for a group of the coach’s fans. Painted by 92-year-old artist Cal Massey, the painting features Chaney in a suit with his familiar red tie with the top collar of shirt opened. He is holding a basketball in his hand and appears to be in intense, deep thought. To the left of Chaney is a small window of an outside nature scene.

Commissioned by the Philly Legacy/Bridging Worlds Mentorship Program, visual artist Cal Massey’s painting captures Chaney’s passion and energy on canvas via through various watercolors. The 92-year-old artist was the first African American artist to work as an illustrator for Marvel Comics in the 1950s.

“It made sense for a legend to immortalize a legend,” said Steve Satel, founder of the Moonstone Arts Center-based Philly Legacy project. “It makes sense that a legendary artist would have unique understanding into a legendary basketball coach of the same era. Cal is as big in the art world as Chaney is in the basketball world. More than any other artist, [he] brings the history of the world to the present and projects the future.”

In order to paint the portrait, which Chaney didn’t sit for, Massey downloaded several pictures of the coach in an effort to capture all aspects of him.

[Basketball coach] is only one of his personalities,” Massey said. “So I said, ‘What can inject into it?’ He’s sitting in this room as if he’s posing for it. I put the concept of nature because it’s the basic concept of existence.  We are the nature of our existence, but we’re also the personality that we are putting forth. It calmed down the whole thing and gave it a human feel.  He’s not that bad, he’s just determined to get what he wants.”

However, throughout a career that spans over five decades, Massey said he has taken the most pleasure in capturing the Black community in all of its manifestations and diversity of colors.

You can see that kaleidoscope of color in the African-American community in Massey’s Moorestown, N.J. home, which is more like an art gallery in some fancy part of New York or Philadelphia.

“It gives me an appreciation,” Massey said. “There are so many diverse colors in life.  This complexion is all over the world in great quantities of people. To me, it was a test of the gift that God gave me to be able to capture this.”

Massey, who was born in 1926, has been drawing and illustrating since he was four-years-old. During his time in the military, he painted photographs of his fellow soldiers. He honed his skills as an artist here in Philadelphia at the Hussian Art School.

One of the most important things Massey said he learned as a visual artist was how to paint and draw human beings from his own imagination. During his time in art school, Massey said he meet a comic book illustrator that altered the course of his career.

Massey’s ability to draw from his own head landed him a spot at Marvel Comics in New York in 1951 where he was one of the artists for the action comic, “Daredevil” as well as number of science fiction, war and romance comics. He said Stan Lee was really impressed with his work.

“(Lee) flipped,” Massey said. “He had no Black comic book illustrators and he loved my work so much that he didn’t want me to work for anybody else.”

Massey stayed at Marvel for seven years (1951-1958). He spent the rest of career working as a visual artist in a variety of forums. During his time at the Franklin Mint, he worked as a sculptor and designer where he designed a commemorative medal of Douglas MacArthur.  He also designed a medal known as the “High Jump” to commemorate the 1996 Summer Olympics in Atlanta.