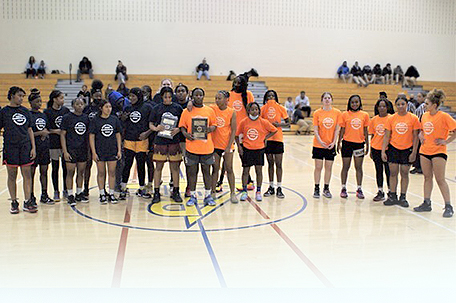 The best female players gathered at Universal Audenried Charter High School to display their talents. This year, fans were treated to a doubleheader for only $5.00 at the door and got more than they bargained for — some great basketball action.

The exciting second game in the doubleheader featured Imhotep Charter 5-10 senior guard Janai “Star” Smith, who scored 36 points. Smith scored 13 points and ripped down 10 rebounds. She helped push the Gray team against a tough defense by the Blue team.

At the end of the third quarter, the Gray team was leading the game, 38-22. By then, Smith had scored 24 points for the Gray Team and in the fourth quarter, she scored 12 more points. The Blue Team had only allowed 6 points in the final quarter.

Next year, Smith will be attending college and playing basketball at the University of Maryland Eastern Shore. In 2021, she had a great season for Imhotep Charter, she was named the Philadelphia Public League Player of the Year. While at Imhotep Charter, Smith helped lead her team to back-to-back Public League titles. Both times, her team defeated Mastery North in the Public League championship game.

This year, the Public League All-Star Classic was announced by myself.  I have been their announcer for the games five times. It is a great honor.

Since I have been announcing the All-Star games, I have met a lot of exciting players over the years. I started announcing the Public League Girls All-Star game back in 1984 when former William Penn High girls’ basketball coach Alison Eachus was the organizer of the games. Mrs. Eachus brought me aboard after I served as the basketball announcer at Germantown High School. During that time, I was also a basketball announcer for the Sonny Hill Basketball League.

In the second game of this year’s  doubleheader, referee Michelle Wilmore worked at the scoring table. She ran the game clock and the scoreboard. She also helped out at the table after she served as a referee in the first game.

Next year, the Public League All-Star Classic will be played at a different location. Right now, there are plans to make it even more exciting for basketball fans to watch.

Former John Bartram High girls basketball coach Joe Garrett, who helped the run the Public League Girls All-Star Classic from 2014 to 2016, feels that girls basketball in Philly is becoming more popular than ever before.