“If you’re going to be the champs, you’ve got to beat the champs!” 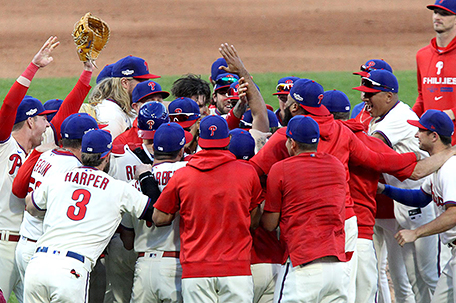 Taking their cues from designated hitter Bryce Harper, the Philadelphia Phillies defeated the Atlanta Braves and will take on the San Diego Padres for the right to go to the World Series.

Throughout the 2022 season, Philadelphia sports fans thought that their Philadelphia Phillies would be joining them in watching MLB playoffs and the World Series from home, and if they did make it to the postseason, they’d stay long enough for a cup of coffee.

But instead, the team will be adding to their collection of frequent flyer miles as they head to San Diego’s Petco Park to play the San Diego Padres on Tuesday night for the National League Championship pennant and the right to go to the 2022 World Series. It will be the first time that two teams with less than 90 regular season wins will go against each other for that slot.

The Padres defeated the Los Angeles Dodgers, the team with the best regular season record in the league, 5-3 to punch their ticket to the NLCS.

The Phillies kept last year’s World Series champions, the Atlanta Braves, from repeating by beating them 8-3 in Game 4 of the National League Division Series last Saturday at Citizens Bank Park. It will be the team’s first trip to the NLCS since 2010.

The usual angry cynicism of Philly sports fans was drowned out by loud cheers amid a sea of waving red towels in the stands and champagne flowing in the clubhouse.

“They (the fans) want to win. The players want to win and we’re all in the same boat,” Phillies third baseman Alec Bohm said. “When we play bad and they boo, we get it. To see this place (Citizen’s Bank Park), like, it was makes it all worth it. …When we know when we play bad and they let us know and that’s fine, it’s all good. I think the reward for everybody in this building tonight is pretty sweet.”

Riding the momentum of being in front of their home fans after a long road trip, the Phillies jumped on Braves pitcher Charlie Morton in the second inning thanks to a three-homer by centerfielder Brandon Marsh.

Phillies manager Rob Thomson said his team fed off the energy of the 45, 660 fans at Citizen’s Bank Park.

“I think the city captured us, more than that. To see what, what is it, 46,000 people, can do, to motivate a club and just the passion they have for the ballclub,” Thomson said. And it was incredible. So loud. … And it helps the players so much. It motivates them. It gives them confidence. It was a really special couple of days.”

After the Braves cut the lead to 3-1 on a solo homer by Orlando Arcia in the top of the third, Phillies catcher J.T. Realmuto became the first catcher in MLB postseason history to hit an inside-the-park home run.  The ball off Realmuto’s bat hit the State Farm Insurance sign and rolled into right field.

By the time the ball made it back to the infield, Realmuto had slid across home plate. Watching the Phillies catcher rounding third for an inside-the-park home was definitely a good sign for the Phillies.

“It’s electric,” Realmuto said. “I’m not usually a guy that shows a lot of emotion. When I slid into home, I couldn’t help myself. I was so excited. Excited for this city. Excited for this team. It was one of those moments I’ll definitely remember forever. And it was just a lot of fun.”

It should be noted that Realmuto, who was 2-for-5 with two RBI, led the team in stolen bases this season.

“J.T. is one of the faster guys that we have on the team,” said Phillies second baseman Jean Segura.  “As soon as the ball hit the wall, I knew he had a pretty good chance.”

After that point, the Phillies added three more runs in the sixth—RBI singles by first baseman Rhys Hoskins, Realmuto, and Bryce Harper, who later homered in the eighth, sealed the deal for the Phillies.

Inside the Phillies clubhouse, the champagne flowed like a mighty stream as the team celebrated its first trip to the NLCS in 12 years. In a year when not many felt the Phillies were good enough to get in, they find themselves four wins away from the World Series.

For Hoskins, who has experienced the frustration of watching his team not qualify for the playoffs as the longest-tenured position player on the squad, the opportunity to play for the National League pennant is special.

“It’s everything. It’s why we play, it’s why we show up on Feb. 1 and why we do all that stuff in the offseason,” Hoskins said. “It’s amazing.”

And it all begins on Tuesday in San Diego on Fox Sports 1. You can also listen to the game on the Phillies Radio Network on WYSP, 94.1.