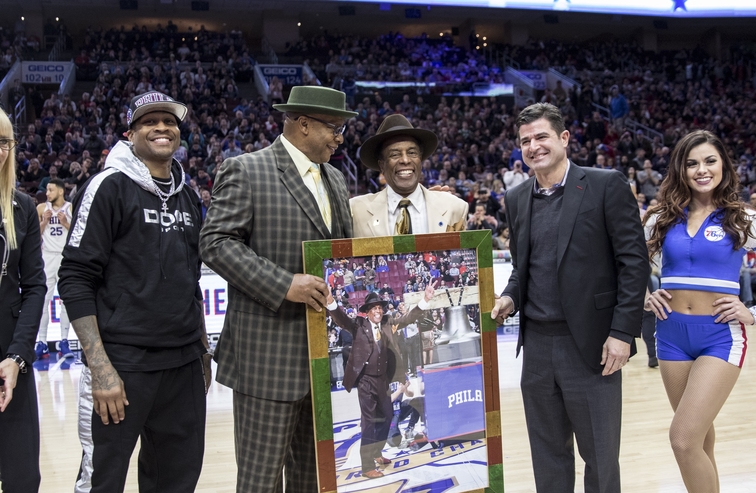 By Brian Seltzer for Sixers.com

PHILADELPHIA, PA – For a man who’s always been great with his words, Sonny Hill was pretty much left at a loss for what to say.

During the first time out of Saturday’s first quarter, the 76ers surprised the long-time hoops fixture – both local and beyond – by recognizing his six decades worth of contributions to the organization, and the sport.

Not only was Hill – accompanied by Sixers Chief Executive Officer Scott O’Neil, Chief Operating Officer Lara Price, and former players World B. Free and Allen Iverson – introduced for an on-court salute in front a sold-out crowd, the team announced that a yearly honor – The Sonny Hill Legacy Award – will be given in his honor.

“It’s beyond my wildest dream,” said Hill, now 81 years young. “To be on the journey that I’ve been on…and do the things I’m doing, I couldn’t have dreamed anything like this. I’m on cloud nine.”

Raised on 16th and Dauphin Streets in North Philadelphia, and a product of Northeast High School, Hill spent more than a decade as a professional player in the Eastern Basketball League before going onto establish the renowned Sonny Hill Community Involvement League in 1968. In its half century of existence, the program has helped foster and nurture the talents of the some biggest names to emerge from the Delaware Valley, future pros Kobe Bryant, Rip Hamilton, Aaron McKie, Lionel Simmons, and Rasheed Wallace among them, as well as dozens of other Big 5 standouts.

“It’s a calling,” Hill said Saturday about his lengthy tenure in basketball.

His mission has revolved around “reaching back, touching people, and trying to make a difference as individuals touched me as I was growing up to allow me to be the person I’ve become.”

“It’s all about that philosophy,” said Hill.

Over the years, Hill has also been a mainstay on Philadelphia sports talk radio, hosting a weekend morning show on WIP. His role as special advisor to the Sixers’ front office has allowed him to serve as a mentor to generations of players, including the present one, featuring Joel Embiid.

“Before he started playing,” Hill said of Embiid, “I could see the beautiful shot, the rotation, how soft it is, and I said to him, ‘You got a chance to be a young Wilt Chamberlain.’ I’ve never, ever told that to anybody before.

“It’s the most phenomenal thing that I’ve ever seen in basketball, and I’ve seen just about everything, on all sides, not just the NBA, but the history of the game of basketball. I have never, ever seen anyone with the limited amount of playing time develop his skills at the level Joel Embiid’s skills are at this point.”

As he looks farther ahead, Hill sees a bright horizon, not just for Embiid, but the entire Sixers franchise.

And there’s no doubt that, as he’s been for decades, Hill will be there for the ride, doing his part to help the cause.

A Salute To Mr. Basketball