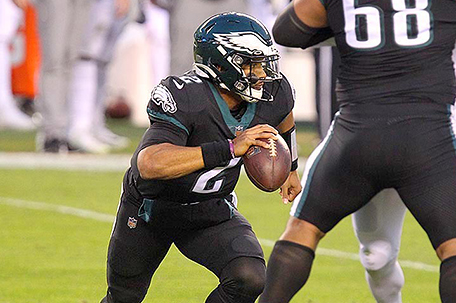 You can never say that one guy can make a real difference in a game that involves 21 other guys.

But if we are honest with ourselves, with the way that the Philadelphia Eagles offense moved the ball in last Sunday’s 24-21 upset win over New Orleans Saints at Lincoln Financial Field, you would hardly recognize that this was the same team that has bumbled and stumbled its way to horrific losses in their last four games.

And yes, in this case, it was because of one man — rookie quarterback Jalen Hurts, who led the Birds to their first win since Nov.1.

“Sometimes you look for an opportunity to jump-start things, to reset a little bit,” head coach Doug Pederson said. “Obviously, Jalen (Hurts) got the start. I thought overall, there were some good things and it kind of gave us the spark as a team that I was looking for and we were looking for as a team.”

Hurts was able to light that fire to an Eagles win because of his arm and his quick feet. He gained 107 yards on the ground and completed 17-of-30 passes 167 yards and one touchdown with zero interceptions and no sacks. It was just the fifth time this season that an Eagles quarterback didn’t throw an interception.

The Eagles’ often-maligned patchwork offensive line did not allow Hurts to be sacked. Hurt’s only hiccup in the game was a fumble late in the fourth quarter that led to a Saints touchdown that cut a 10-point Eagles lead to three with under two minutes left in the game.

Hurts’ mobility and his ability to throw the football away when nothing was there kept the Saints defense from planting him into the ground. Playing against the NFL’s No. 1 defense, Hurts accounted for 273 of 413 of the Eagles total yards on offense.  He was definitely the spark the moved an offense that had been stuck in the mud and going nowhere fast in what had been an ugly four-game losing streak.

“He (Hurts) played awesome,” said Eagles running back Miles Sanders, who gained 115 yards on 14 carries with one touchdown. “The tape shows for itself. He’s so confident, he’s a natural leader. We just needed that. He gave us that spark that started from last week. Ya’ll seen it all, we played a whole four quarters today. We looked like a complete team. He did a helluva job.”

Hurts’ ability to use his legs opened an Eagles rushing attack that hasn’t been utilized on a consistent basis this season. As a team, the Birds ran for 246 yards against a Saints defense that hadn’t allowed a 100-yard rusher in 55 straight games. Sanders said he was able to find that space on his 82-yard touchdown run that gave the Eagles a 17-0 lead in the second quarter because of Hurts’ mobility.

“It opened up a lot because from the first play to the last play they had to respect him and his legs,” Sanders said.  “He was doing a great job reading the defensive end and reading his keys to pull it or take it.”

Hurts attributed his success to his teammates including Wentz who helped him during the week and while he was on the sideline watching the game.

“Yeah, [Wentz] had a few tips for me. A few little things pointing out here and there – certain looks, seeing the space of the defense – so he was really helpful this week,” Hurts said.  “As far as the team, the guys just told me to be you. [To] go out there and be J-Hurts, everything else will take care of itself.”

Meanwhile, Pederson was careful (or perhaps unwilling) not to give Hurts all the praise for the win. During his postgame press conference, Pederson also gave credit to the Birds defense for shutting down the normally potent Saints offense and keeping them in catch-up mode throughout the game. The Birds sacked Saints quarterback Taysom Hill five times and they forced two turnovers.

“But you know, this win today is not about one guy,” Pederson said. “This win is about this team and how resilient this team is. … We went through it again today, injuries piled up a little bit in the second half. Guys stayed strong. [Hurts] obviously was a part of the win, but my hat’s off to a lot of guys in this football game.”

The Eagles defense was able slow down the explosive offense despite losing cornerbacks Avonte Maddox (knee), Darius Slay (concussion) and safety Rodney McLeod (knee) in the second half.

When Pederson was asked if would start Hurts over Wentz, Pederson was predictably noncommittal and refused to say who would start next week against the Arizona Cardinals. Looking at Pederson’s demeanor during the Zoom conference when he was asked about Hurts, it was like he couldn’t bring himself to giving the former Oklahoma star too much praise for fear of offending Wentz.

All that basically means is that we now have a quarterback controversy on our hands and how all of this ends up could decide the collective fates of both Pederson and general manager Howie Roseman.

On one hand, the Eagles this season have struggled on both sides of the ball and wasn’t all Wentz’s fault, given all the injuries on the offensive and the wide receiver group. But from what we witnessed last Sunday, Hurts, behind that same injury-riddled offensive line, was able to get more out of the offense in one game than Wentz did during the Birds four-game losing streak.

Who would you start? Stay tuned.

The Eagles play the Arizona Cardinals in Glendale, Arizona on Sunday at 4 pm on Fox-29.