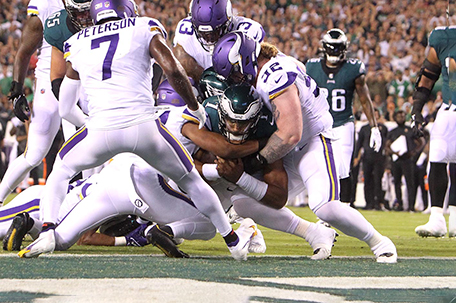 As I milled around the press room during halftime of the Philadelphia Eagles’ win over the Minnesota Vikings Monday night, I ran into Eagles radio color commentator and former Eagles special teams star Ike Reese and asked him if the game has slowed down for quarterback Jalen Hurts.

The answer from the former Eagles was an unequivocal yes, and the second-year quarterback’s numbers on Monday night proved it.

In his second game of the season, Hurts picked apart the Minnesota Vikings defense using both his arm and his legs in the Birds 24-7 in the Monday Night home opener at Lincoln Financial Field.

Hurts completed 26-of-31 passes for 333 yards for yards with one touchdown and one interception. The former Oklahoma and Alabama star also picked up 57 yards on the ground and scored two touchdowns including a spectacular 26-yard touchdown run late in the second quarter.  He also directed the Birds on an eight-play, 75-yard drive that led to a 38-yard field goal by kicker Jake Elliot.

After enduring a year of criticism from Birds fans who thought he was more of a question than he was an answer, the off-season work Hurts has done to make himself better is showing itself on the field, Eagles head coach Nick Sirianni said.

“It’s slowing down for him, and it should for him at this point because he’s a year further into this process and we’re talking about getting better every day and he lives that,” he said. “He’s one of our captains and he’s one of our leaders … That’s why you’re seeing major improvements.”

Hurts was not only able to complete passes in very tight windows to his receivers, but he also did a good job of distributing the football. Eight different Eagles caught passes from the Eagles starting quarterback.

During his postgame press conference, Hurts said the reason for things slowing down for him as a passer is because of the work he has put in and having the continuity of being in the same system for the second year in a row.

“I think everything comes with time,” said Hurts, who threw a 53-yard touchdown pass to wide receiver Quez Watkins early in the second quarter. “As time goes, you find more comfortable in what you’re doing. You find more of a niche of what that looks like for you. I think as an offense, as a collective group. … We put so much work to make things efficient.”

The Eagles set the tone for the game with their first drive of the game when Hurts led the offense on an 11-play, 82-yard drive that ended with a four-yard touchdown by Hurts to give the Birds an early 7-0 lead.  The Eagles were able to get that good start by going no-huddle.

“Whenever you go out there and score on the first drive that’s a huge tempo-setter,” said Eagles center Jason Kelce.  “The big part of the game usually is how you start off a half and how you finish a half end up being huge momentums plays for the game in crucial moments.  It’s really when you start off a game like that.

As Hurts was doing his thing for the Eagles offense, Eagles cornerback Darius Slay and the Birds’ defense were wreaking havoc and letting loose the dogs of war against Minnesota’s top-flight receivers-Justin Jefferson and Adam Thielen, both of whom were both held to under 100 receiving yards.

“We’re just trying to stop them from scoring,” Slay said. “Guys were out there executing their jobs.”

The Eagles secondary intercepted Vikings quarterback Kirk Cousins three times-two of those came courtesy of Slay, who also had five passes defended.  The Eagles’ defense held the Vikings to a third-down conversion rate of 4-12 and only 264 yards of offense.

“(Vikings receivers) are a very talented group,” Slay said. “You saw what they were capable of doing, but we got talented guys, too. We got a good group and we’re up for any challenge. That’s what we’re all here for.”

The Eagles’ next challenge awaits them on Sunday in Washington as they take on the Commanders and former quarterback Carson Wentz at FedEx Field in Landover, Maryland. Kickoff is at 1 p.m. and you can catch the game on Fox-29.