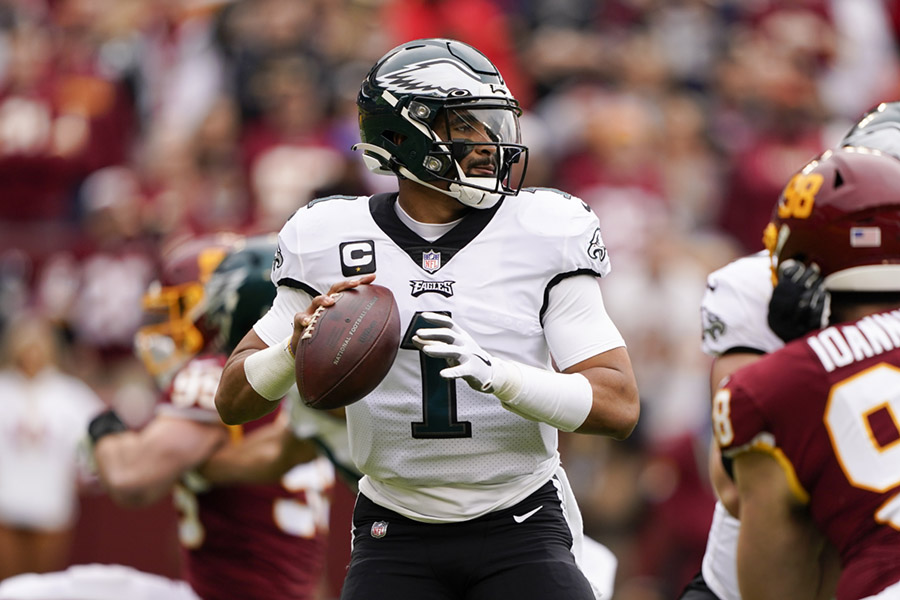 When the Philadelphia Eagles were struggling at 2-5, they were the talk of the town for all the wrong reasons.

On a variety of forums between social media and sports talk radio, fans wanted to run first-year head coach Nick Sirianni, his coaching staff, and starting quarterback Jalen Hurts out of town on a rail.

Not many people believed the Eagles would make it to the playoffs.

But the Eagles (9-7) made it into the postseason by winning seven of their last nine games and they did it with a power-running attack led by Hurts that became the best in the league. The Birds are averaging a league-leading 160 yards per game.

After a mistake-filled 33-22 loss to the Las Vegas Raiders, the play-calling on both sides of the ball came under intense scrutiny. The offense didn’t run the ball enough, Hurts turned the ball over and missed open receivers. More than a few Eagles fans questioned whether Hurts was a franchise quarterback. The defense couldn’t generate a pass rush.

While he has struggled at times throwing the football, Hurts’ ability to use his legs has helped the offense in both the running game and in the passing game where he has made significant progress during the team’s seven-game winning streak, according to Eagles offensive coordinator Shane Steichen.

“He’s been tremendous, just the growth you’ve seen from him week in and week out. I mean, it was big to see even this week (against Washington),” Steichen said. “We had some chunk plays down the field. He was able to check it down to [RB] Boston [Scott]. We had the big check-down to Boston. He went down the sidelines for about 15 or 20 [yards]. Those are huge chunk plays.”

Coming into Saturday’s game against the Dallas Cowboys, Hurts has completed 61.3 percent of his passes and has thrown for 3,144 yards with 16 touchdowns and nine interceptions. But Hurts mobility has been the fuel for one of the league’s prolific rushing attacks.

Hurts leads all NFL quarterbacks in rushing with 784 yards with 10 touchdowns and is averaging 5.6 yards per carry. To go along with his passing yards, Hurts has provided 67 percent of the Eagles’ total offense.
At 23, Hurts will be the youngest quarterback in Eagles franchise history to lead a team into the playoffs. Eagles rookie wide receiver Devonta Smith, who was Hurts’ teammate at Alabama, said his teammate has always been ready for any challenge thrown at him throughout his career.

“He’s ready for everything, no matter how big it is. No job is too big, no job is too small,” Smith said. “Just going knowing that he’s going to [be] prepared …He’s going to give us the best chance to win.”

Against the Washington Football Team last Sunday, Hurts completed 17-of-26 for 214 yards and ran for 44 yards on seven carries. In another game in which the Eagles fell behind early, Hurts put the offense on his back whenever the Birds were in a tight spot whether it was his arm or his legs.

Late in the third quarter, the Eagles, trailing 16-7, faced a third and 14 from the Washington 31 when the WFT defense forced Hurts to scramble out of the pocket. Instead of taking off and running, Hurts moved to his right and threw a dart to wide receiver Greg Ward inside the Washington five. The Eagles eventually scored the touchdown that cut the lead to two.

“I think as when Jalen was making plays with his feet early on, what we said to ourselves was, ‘Man, we’re a couple of scramble throws away from being really explosive at this thing,’” Sirianni said. “And that’s been an emphasis for us as coaches and as players, and I know we’ve gotten better at that in a lot of different areas, and it really showed up (Sunday).”

Sirianni said that particular play was an example of Hurts’ toughness and how much he has grown as a quarterback.

The Eagles play their final home game at Lincoln Financial Field on Saturday night at 8p.m. on 6ABC and ESPN.

Playoffs? What Do You Mean, Playoffs?