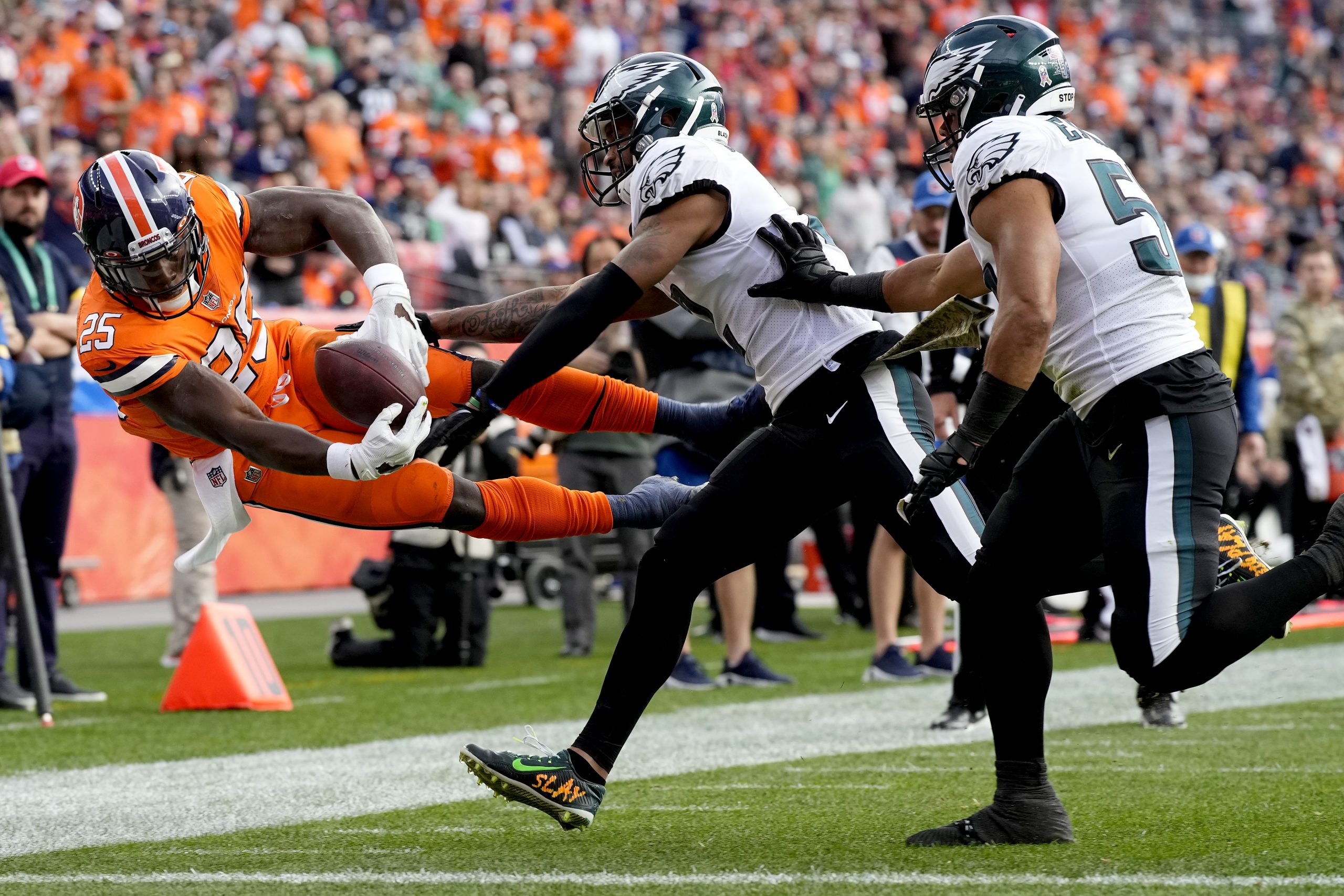 On Sunday, the Philadelphia Eagles looked like they knew what they were doing.

Above photo: Denver Broncos running back Melvin Gordon (25) is stopped short of the goal line by Philadelphia Eagles cornerback Darius Slay (2) during the first half of an NFL football game, Sunday, Nov. 14, 2021, in Denver. (AP Photo/David Zalubowski)

I don’t know if the Philadelphia Eagles are going to the playoffs this season.

And to tell you the truth, it’s probably something the team shouldn’t even be thinking about, despite Sunday’s 30-13 win over the Denver Broncos. They’re still too much of a work in progress for that.

On Sunday, the Eagles showed visible improvement as a team on both sides of the ball. The true sign of real progress for a team is through winning and not finding it in the silver-lining of a loss.

The Eagles much-maligned defense held the Broncos offense to 308 total yards and held them to just 1-for-11 on third-down conversions. More importantly, the defense came up with the play that sealed the game.

Late in the third quarter with the Eagles hanging on to a seven-point lead, the Broncos decided to go for it on fourth and one from the Birds 23-yard line. Denver running back Melvin Gordon was stripped of the football by Eagles linebacker Davion Taylor. It was recovered by cornerback Darius Slay who returned the ball 83-yards for the touchdown.

On offense, the Birds run-first philosophy of the last three weeks is making a better quarterback out of Jalen Hurts. He has become more efficient and is starting to find his groove as a passer. Against the Broncos, Hurts completed 16-of-23 passes for 178 yards and two touchdowns and one interception.

The Eagles as a group ran for 214 yards. Jordan Howard gained 83 yards on 12 carries with one touchdown. Boston Scott added 81 yards on 11 carries while Hurts himself added 53 himself.

“I just think we have a talented crew,” Hurts said. “It seems like we’re finally in that groove and we’re making that progress that we want to make as a football team and as an offense. We just want to go out there and be consistent in whatever we decide to [use to] attack the defense –whether it’s throwing it 40 times or running it 40 times.”

It was in the passing game where you saw a lot of growth from Hurts, who has been the subject of intense criticism for his lack of accuracy as a passer. No one could say that about Hurts on Sunday, especially in the first half. He completed 69 percent of his passes including a pair of TD passes to rookie wide receiver Devonta Smith in the first half.

“He just gets better every day. He truly exemplifies the getting one percent better everyday and he just continues to get better,” Eagles head coach Nick Sirianni said. “He did some really good things in that game … He really did a good job today.”

Smith, who caught four passes for 66 yards with those two scores, said Hurts did a good job of running the offense.

“It was great with him being the leader that he is,” said Smith, who was celebrating his 23rd birthday. “His preparation up until game time. We’re in the locker room before a game and he’s going over his call sheet going over things, highlighting what he likes. The guy is playing well.”

Hurts would have had a third touchdown pass but wide receiver Quez Watkins, who was wide open in the Broncos end zone, dropped what would have been a 34-yard touchdown pass. Instead, the Eagles had to settle for a 52-yard field goal by Jake Elliott.

Ever since the win over the Detroit Lions, the Eagles offense has moved the ball well and gave Hurts space in the passing game to plant his feet in the running game. When he can’t find a receiver when teams go man-to-man, Hurts can take off and run when he can’t find anyone open.

Eagles fans and observers may not want to admit it, but the Eagles coaching staff with Sirianni and offensive coordinator Shane Steichen seem to be employing the same run-first philosophy that the Baltimore Ravens employed with Lamar Jackson when he was a rookie and trying to find his way in 2018.

Now, I am not suggesting that Hurts will emerge with the kinds of accolades that Jackson has right now. What could give Eagles fans hope is that Hurts is a better, more polished passer than Jackson as a rookie.

More importantly, the Eagles are starting to find a rhythm on offense with the running game and if they can do the same thing on defense, they could win a few more games.