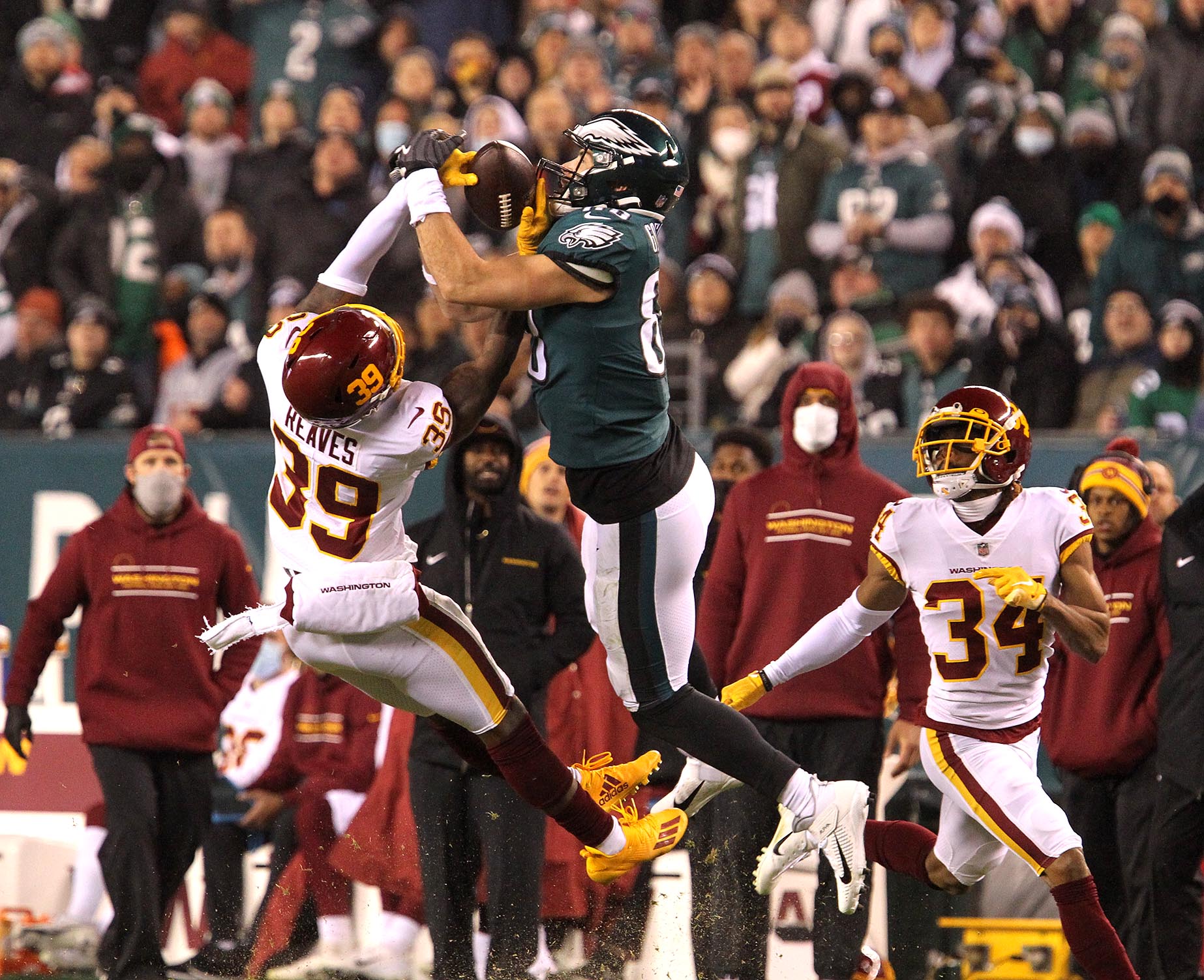 Tuesday night’s game versus Washington Football Team (WFT) really wasn’t about whether the Eagles are going to stay in contention for an NFC Playoff berth.

It was the beginning of a four-game final exam if you will for starting quarterback Jalen Hurts who tossed three interceptions in a loss to the New York Giants. Hurts’s situation became even more interesting when he missed the New York Jets game with a sprained ankle and Gardner Minshew had an outstanding performance in the win.

Minshew-mania was in full effect, and some were even calling for the Birds to bench Hurts during the Eagles bye-week.

In the Eagles 27-17 win over a COVID-depleted WFT, it was Hurts and a powerful rushing attack that carried the day for the Birds who evened their record at 7-7 with three games left in the 2021 season.

If this game and the next three are a referendum on whether Hurts is the Eagles franchise moving forward, the former Oklahoma star certainly played well enough to quiet his doubters at least for now. What happened his last start against the New York Giants at Met-Life Stadium is a distant memory.

“I flushed that a long time ago,” Hurts said during his postgame press conference. “I forgot about it. I get to play them this week. … the job ain’t done yet.”

Hurts completed 20-of-26 passes for 296 yards with one touchdown and one interception that wasn’t his fault. In all, there were three drops by Eagles receivers. Hurst, who gained 38 yards rushing, also scored two touchdowns on a pair of one-yard quarterback sneaks.

“The ball was going where it was supposed to go. When he needed to run, he ran,” said Eagles head coach Nick Sirianni. “The ball was accurate. …In a little bit of that drizzle and when the field is wet like that, it’s a great day to pass … The fact that (Hurts) handled that wet ball. It takes a little bit of concentration to catch the ball and throw the ball … He did an unbelievable job in some weather that required it. Awesome job led by (Hurts).”

For the fifth time this season, the Eagles rushing attack had another 200-yard plus performance. They rushed 238 yards on the ground. Running back Miles Sanders led all rushers with 131 yards on 18 carries.

For the Eagles first two series on offense against Washington, they couldn’t get out of their own way. First, tight end Dallas Goedert dropped a Hurts pass that caromed off his foot and into the hands of Washington safety Landon Collins.

That miscue led to a Washington touchdown-a one yard run by running back Antonio Gibson to give WFT a 7-0 lead midway through the first quarter.

On the Eagles next possession, the ball to the Washington 16-yard line. But on second and six, Hurts was sacked by WFT defensive end Montez Sweat, who jarred the ball loose. It was recovered by Collins who returned it to the Washington 47.

It was as at that point that Sirianni had an animated discussion with Hurts about ball security or the lack thereof on his young quarterback’s part.

“I thought he was careless with the football, and I let him know that and we are just honest with each other,” Sirianni said.  “Sometimes, it comes off as we’re just talking through it and sometimes, I’ve got to deliver the message a little bit different.”

Hurts, who said he has always been used to getting chewed out by coaches throughout his football career starting with his father who was his high school coach, responded with a big-time performance the rest of the way.

The Eagles would score 20 unanswered points and never look back. Hurts would put the game away on a 19-yard touchdown pass to Greg Ward.

“One of the best football games I’ve seen him play and so what an unbelievable job by him of — what did he say? Flush it, don’t look at it, flush it, and then move on,” Sirianni said.