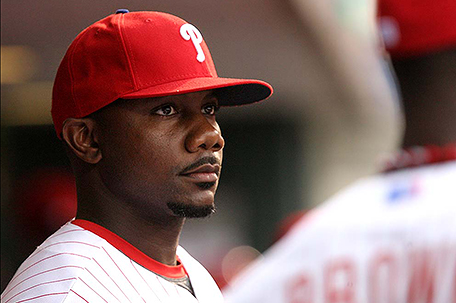 ABOVE PHOTO:  Phillies’ first baseman Ryan Howard has struggled at the plate this season.  (Photo by Webster Riddick)

Last Sunday, Ryan Howard drove in the winning run with a walk-off single to cap a 7-6 come from behind victory over the New York Mets.

In a season where Howard has been struggling and getting booed by whoever shows up at Citizen’s Bank Park, it was refreshing to see No. 6 carry his team to victory the way he did during the Phillies remarkable five-year run of division titles that included a World Series championship.

The 2014 season has been the worst for Howard in a non-injury season. He is batting an anemic .219 with 18 home runs and 73 runs batted in (third in the National League). Even with Sunday’s game-winning hit, Howard is batting just .223 with runners in scoring position. He was benched for three games this by manager Ryne Sandberg.

On the Phillies last homestand, Howard had four game-winning hits while batting .266 with a pair of home runs.

There have been calls by fans and media folks for him to be traded. If it wasn’t for his hefty $25-million per year salary, Phillies general manager Ruben Amaro Jr. might have sent him packing.

The hard part of watching Howard go through his struggles at the plate is that it’s not for a lack of effort on his part. Leg and foot injuries, especially those to the knees and Achilles, take their toll on athletes and it takes them time to be back at 100 percent.

That was something that Howard said he was going through when I spoke to him about it back in June.

“Once you suffer a big injury, it does take a little bit of time for the normal aches and pains that you used to have before your injuries to become commonplace,” said Howard, who hasn’t played beyond 80 games since 2011. “Now as my body is starting to go through all that stuff, it’s re-learning how to work its way through.”

But fans aren’t going to buy that. When they see Howard strike-out with the bases loaded, they will point to his $25 million per year salary and say that’s not what he should be doing whether he’s hurt or not. They are going to show their displeasure through booing or calling for the team to run him out of town on sports talk radio or social media.

That’s a burden Howard has carried during his time here in Philly. It’s the monster created from 2005 to 2011 when it was his home runs and runs batted in that led the Phillies to a remarkable run that included a World Series championship.

Howard doesn’t have the luxury being the gritty, blue collar player who is gamely trying to fight through his injuries after missing most of the last two years coming into this season. The fact that he leads his team in runs batted in and is third in RBIs in the National League is of no consequence to Phillies fans.

What I find fascinating is that during those periods when fan favorite Chase Utley was fighting through his injuries and not performing at his best, he didn’t get the same kind of acrimony that Howard has gotten during his struggles.

But as much I like and respect Utley, he is able to play the blue-collar superstar role because the real burden of moving and shaking the Phillies offense over the years was on Howard who was the main reason for the Phillies success when they were on top of the division standings.

Howard’s recent complaints about fans booing him were not so much about the fans themselves, but it was more about the frustration within himself of not being able to help his team the way he once did.

I think Howard has more aches and pains that are affecting his performance than he is telling anyone including his team. If he points to it, he will be seen as a $25 million a year whiner. So Howard will do what he always does—soldier through it with his best effort while hearing the boos along the way.