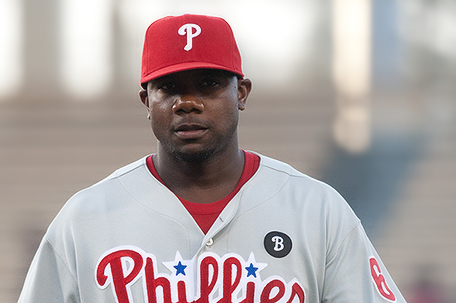 To say that 2014 hasn’t been a good year for Philadelphia Phillies first baseman Ryan Howard would be an understatement.

Not only did he have a bad year on the field, Howard’s off field life became a bit of a mess due to a series of dueling lawsuits he and his twin brother Corey filed against each other.

The recently settled lawsuit was sparked by Ryan’s decision to terminate the personal assistant contract he had with Corey in 2013. It was a decision spurred by the ESPN 30 for 30 documentary “Broke” and based in the desire to let his family be family, not employees.

It did not go over well.

Ryan was paying his twin $7,975 every two weeks for handling his business affairs through his RJH Foundation so that they he could concentrate on baseball. Their parents Ron and Cheryl Howard, his brother Chris and his sister Roni Cowley, were also members of the foundation’s team despite having no financial stake of their own in it.

Prior to Ryan taking control of the foundation in 2012, family members enriched themselves to the tune of over $2 million, some of which was poured into luxury cars and other items, according to the counter suit Ryan filed against his twin.

It’s sad to see that things got this bad for the Howard family because I remember how close they seemed during happier times.

I met Howard’s family in 2006 when he won the MVP Award and again in 2009 in Kansas City when I was receiving the Sam Lacy Award from the Negro League Baseball Museum. On the surface, they seemed like your typical middle-class family and you could understand why he would trust them with his finances.

The problem was that none of Howard’s family members had experience in the business of sports and the greed bug bit and bit hard.

Or as Mase and Diddy put it “Mo Money, Mo Problems.”

Multimillion dollar athletes often find themselves not knowing who to trust. For example, former Cleveland Browns quarterback Bernie Kosar, whose story was featured in “Broke” talked about how trusting family with his money nearly ruined him financially.

No one was really qualified to handle all that money. Seemingly nice people like your family members end up becoming greedy when millions of dollars are on the table. Family members can sometimes end up becoming as unscrupulous as one of those knuckleheads an athlete meets in the streets.

“Getting money sometimes is like turning the lights on in a dark house in the ghetto,” said former Baltimore Ravens and New York Jets linebacker Bart Scott during his segment in “Broke.” “It exposes all the roaches and the rats.”

While his family  may not like him in the short term, Ryan Howard may have saved himself from further heartache and even worse relations with his relatives by taking control of his foundation.

Howard, who will make $50 million over the next two years, needs to find someone he can trust to manage his money. He’s 35, injuries are taking their toll, and another contract like the one he currently has with the Phillies probably isn’t in the offing.

The obvious lesson here is that even the people who love you, people who are seemingly grounded and have the noblest of intentions, can become people you don’t recognize when millions of dollars are involved. I hope that Howard and his mom, dad, sister and brothers can heal and go back to being “just family.”

After all, blood should be thicker than money, right?