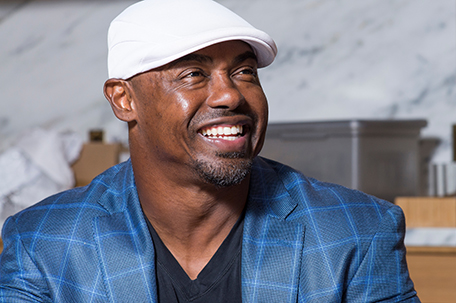 The Year Of The (Philadelphia) Eagle continues with the enshrinement of Brian Dawkins into the NFL Hall of Fame.

Philadelphia Eagles fans are still no doubt feeling the euphoria of winning the franchise’s first Super Bowl. When the Birds began preparing for that title defense on Wednesday at the team’s NovaCare facility, they did it with throngs of fans looking on.

However, this year’s training camp is special for Bird fans not just because the team has a shiny new Lombardi Trophy to show off, but also because a fan favorite will be enshrined among the NFL’s all-time greats in the league’s version of Valhalla.

When Brian Dawkins is inducted into the Pro Football Hall of Fame on August 4th, it will be the icing on the cake that has been the whirlwind year for Eagles fans that started with a successful NFL Draft on the Ben Franklin Parkway and ended with a Super Bowl championship and a memorable parade down Broad Street.

Dawkins earned his bust in Canton through being the face of toughness and intimidation for the Eagles defense for the 13 seasons he played here. Whether he was the eighth guy in the box to stop the run or putting the fear of God into an opposing receiver, Dawkins was the ultimate enforcer.

To me, Dawkins was the embodiment of what it meant to be “all in” long before that term became fashionable. What I will always remember about Dawkins was how he hyped the crowd, whether it was at the old Veterans Stadium or Lincoln Financial Field, without having to be anything other than himself.

The mere sight of a fired-up Dawkins got the crowd going even more than the artificial pregame pyrotechnics that reverberated with a resounding boom throughout the stadium. He was his own “Legion of Boom” long before Richard Sherman and the Seattle Seahawks coined that term for themselves.

The same intensity that Dawkins used to fire up the Eagles crowd was amped up a few notches when he faced the opposition on the field. Throughout his career, Dawkins laid out opposing receivers and ball carriers with some blood-curdling hits. Perhaps his most memorable hit was in the 2004 NFC Championship game when he crushed big Atlanta Falcons tight end Alge Crumpler.

Dawkins was such a disruptive force for the Eagles defense that teams had to know where he was on the field at all times. He had 37 interceptions, which is not bad for a free safety.

His approach to playing defense was so superhuman that he took on the persona of the X-Men’s Wolverine. Weapon X even had a locker right next to his.

But as ferocious as Dawkins was on the field, his off-field persona was equally as passionate. He was passionate about his family and his faith. There was never any question about his character because he wasn’t a man whose name you would find on a police blotter.

More importantly, Dawkins was a true team leader. When fellow Hall of Fame inductee Terrell Owens tried to throw quarterback Donovan McNabb under the bus while trying to renegotiate his contract back in 2005, Dawkins had the signal caller’s back and helped keep the team together.

In a year where the Super Bowl MVP was an Eagles backup that everyone counted out and the improbable became commonplace, it stands to reason that Brian Dawkins would become the next member of the NFL Hall of Fame.

Because let’s be honest here. The Eagles 2017-2018 Season is the kind of origin story the comics love to tell.

Why wouldn’t it include Wolverine?

‘Wolverine’, thanks for the memories!