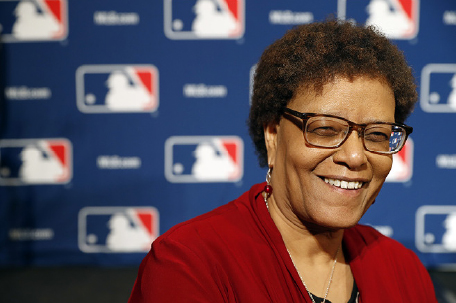 Legendary soul singer James Brown once proclaimed that “this is a man’s world, but it wouldn’t be nothing without a woman or a girl.”

Brown was absolutely right in more ways than even he would know.

When you look at the story of former Philadelphia Inquirer columnist Claire Smith, you see a woman who was not only the first African-American woman, but also the first woman period, to cover Major League Baseball at a time when some in the sport were doing everything they could to keep women out of the clubhouse.

So it’s no surprise that Smith will be the first woman honored by the Baseball Writers Association of America’s J.G. Taylor Spink Award for “meritorious contributions to baseball writing.” The award will be presented during Baseball Hall of Fame Weekend, July 28-31, 2017, in Cooperstown, New York. Notable past winners of the award include pioneering Black sports writers Sam Lacy of the Afro-American and Wendell Smith of the Pittsburgh Courier.

In balloting by members of the BWAA, Smith, who represents the organization’s New York chapter, received 2’72 of 449 votes. She currently works for ESPN as a coordinating editor for its universal news group with an emphasis on baseball.

Smith was a two-time Pulitzer nominee. In 2011, the National Association of Black Journalists honored her with its Legacy Award. In 2000, she received the Mary Garber Pioneer Award from the Association of Women in Sports Media.

If there’s anyone in this country, regardless of profession, who was the ultimate breaker of a glass ceiling it was Smith.  She has excelled in her trade at places like the New York Times and the Inquirer and was on the front lines in the fight to allow women reports in sports locker rooms. Smith kept doing her job as a baseball writer even in the face of opposition from people like former MLB commissioner Bowie Kuhn, who vehemently opposed women sports writers being in the clubhouse. In fact, she was physically removed from the San Diego Padres locker room during the 1984 National League Championship Series.

Because of Smith’s work on the front lines, female sports writers are working side-by-side with their male colleagues without anyone batting an eye.

As important as she was to the fight for equal access for women in sports, Smith was an outstanding reporter and was as knowledgeable about baseball as guys like NBC’s Bob Costas. When I was covering the Phillies for the Philadelphia Tribune, Joe Morgan and other Hall of Famers treated Smith like she was baseball royalty.

Even though I wasn’t writing for an outlet in the mainstream media, Smith was always accessible and willing to share her knowledge. If anything, her presence and her kindness motivated me as a sports writer covering the Phillies.  I am proud to consider her a mentor.

Whenever I wrote stories on controversial subjects, Smith was always an insightful voice and an authority on a variety of issues.

Back in 2009, I was a recipient of the Negro League Baseball Museum’s Sam Lacy Legacy Award. The next year, Smith won the award.  As I proud as I am of achieving that award,  I always felt that Smith should have received it way before me.

But then again, I’ve also thought that it’s about time that a woman of Smith’s caliber and accomplishments should be honored in Cooperstown. I’m glad that the BWAA agrees with me.

So congratulations to Claire Smith on winning the Spink Award.

It’s a long time coming, but it’s also much deserved.