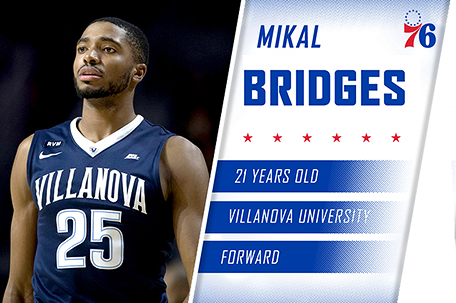 If the management of the Philadelphia 76ers can pull off a first-round trade, they should try and keep Villanova’s Mikal Bridges at home.

With rumors swirling around that Philadelphia 76ers head coach and interim general manager Brett Brown is attempting to make a trade for a top-five pick in this year’s NBA Draft, there’s a distinct possibility that if they pull it off, they’ll make former Villanova star Mikal Bridges their top pick.

It would be a good move on their part, and not just because they wouldn’t have to show Bridges where the practice facility is.

Before I get into the former Villanova’s stats and accolades on the court, Bridges, unlike many of the underclassmen in this draft, has the experience of being a key contributor on a championship team. In two out of his last three years at Villanova, Bridges has been a part of two teams that have won the NCAA men’s title.

To me, that’s an intangible that you can’t discount. Bridges is a guy who hit big shots when games were on the line during his time at Villanova. Fans got a chance to see what he can under pressure in the postseason. In the Big East Tournament Final against Providence, Bridges hit two big three-pointers in overtime including a shot late in the extra-session that put the Wildcats up for good.

For the season, Bridges averaged 17.7 points per game and shot a whopping 43 percent from three-point range.  He also averaged 5.3 rebounds.  He can hit that pull up three-pointer off the fast break. Bridges can also put the ball and take it to the bucket.  If he’s not taking the ball to the bucket, he can hit that 15-foot jumper.

Playing on a team that had its share of superstars like Jalen Brunson, Donte DiVincenzo and Omari Spellman, Bridges showed that he can play within the framework of a team. From what I’ve seen and from what scouts have said, Bridges is good at moving without the ball and stays engaged in the game when his shot is not going to down.

Not only is Bridges a solid offensive player, he can also defend several positions on the floor. At 6-7 and 210 pounds, Bridges has a 7-foot wingspan, which means he can guard the opposing team’s point and shooting guard as well as some swing forward as well.

If Bridges is drafted by the Sixers, he wouldn’t have to burden of having to carry the load of scoring because he’ll have guys like Joel Embiid and Ben Simmons doing the bulk of that work.  On the offensive end, Bridges can be that go-to in close games that could hit that “dagger” bucket from behind the arc or even inside the three-point line in late-game situations.

In the Sixers’ loss to the Boston Celtics in the Eastern Conference semifinals, the Sixers got exposed  for their lack of athleticism at the shooting guard and wing positions.  While Ersan Ilyasova,  J.J. Reddick and Marco Belinelli were outstanding shooters, they couldn’t keep with Jayson Tatum and Jaylen Brown on the defensive end.

Bridges is probably the most complete player coming into this draft.  In a draft chock full of talented underclassmen who played just one year, I think Bridges has the maturity to hit the ground running. I think he’s the best fit for a rising Sixers squad.

That’s why this is a no-brainer for the Sixers’ interim general manager. Brown needs to do what he has to make that deal.

Will three be the charm with top picks from NBA Draft for Sixers?