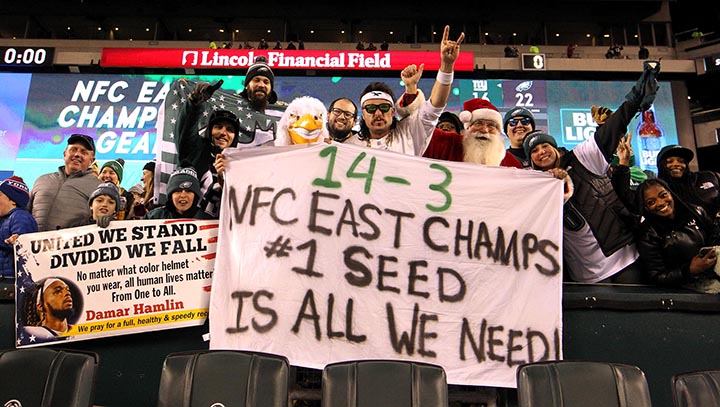 Thanks to the Philadelphia Eagles win over the New York Giants, the NFC’s road To The Super Bowl goes through South Philadelphia.

The Philadelphia Eagles’ victory (14-3) put an exclamation point on the regular season by knocking off the New York Giants and winning not only the NFC East crown, but also securing the home field advantage throughout the playoffs.

While the Eagles are basking in the glory of winning a division title and being spared from having to go on the road in their path to the Super Bowl, getting to Glendale, Arizona isn’t going to be an easy path, and the players know this, they say.

With that first-round bye, the Birds, who set a new team record for wins in a single season and in points scored, will have an extra week to fix the mistakes they’ve made over the last three weeks of the season and to make sure everyone is healthy to make a run for what they hope will be their second Super Bowl title in six years.

“Every week is a learning opportunity and that’s what these last three weeks have been,” head coach Nick Sirianni said. “You’re anticipating growing from that and correct mistakes because you’re not going to play a perfect in a game.”

Over the last three weeks in losses to the Dallas Cowboys and the New Orleans Saints and even in Sunday’s 22-16 win over the Giants, the Eagles have not looked like the dominant team that streaked to a 13-1 record.

“We’ve got two weeks to make sure we clean up what we did today,” said defensive end Brandon Graham, a member of the 2017 Super Bowl team. “To win the division and [the] number one spot was on the list. We accomplished that, but we could be so much better. We’re always being critical of ourselves on where we could be better as a team. It’s just those little things that you don’t want to get beat on now that everything is for real and we’re one and done. So, we’re just trying to make sure that we take care of business these next two weeks.”

Graham suggested that on some level the team’s struggles in the last three weeks of the regular season will help this team understand the sense of urgency the Eagles need to play with during the postseason.

“The last two weeks was as close to a playoff atmosphere as it could be,” he said. “When you’re in tight games, man, it comes down to the little things. I think it was good that we went through some hardships the last two games before we won this one. This one (the win over the Giants) was even tougher.  … People are going to hit you in the mouth if you’re not ready.”

The one place where the Eagles struggled in the win over the Giants was in the red zone. The Birds moved beyond the Giants 20-yard line five times and came away with only one touchdown, four field goals and an interception from quarterback Jalen Hurts in the end zone. Coming into Sunday’s game, the Eagles have scored touchdowns on 72 percent of their drives once they reach the red zone.

“It was uncharacteristic of us,” Sirianni said. “The way we play in the red zone has a lot of different factors to it. … We did some things we’re going to correct.”

The most important thing for the Eagles is that Hurts was back in the lineup for the regular-season finale and for the upcoming playoff run after missing the last two weeks. Against the Giants, Hurts completed 20-of-37 passes for 229 yards with one interception. He ran the ball nine times for 13 yards.

With Hurts recovering from a right-shoulder sprain, the Eagles coaching staff didn’t call any designed runs for the former Oklahoma star.  Hurts said he is going to use this week to get even healthier for the run to the Super Bowl.

“Coming into this game [I’ve] been really pushing myself beyond measures to try and be available,” he said. “We do what we have to do. We’re the number one seed and we are the NFC East champs and that’s the goal we set out to do. Now I can continue to recover and be ready for playoffs.”

The first team to come to Lincoln Financial Field to take on the Eagles for the right to represent the NFC in the Super Bowl will be determined during Super Wild Card weekend. That begins on Saturday at 4:30 p.m. when the Seattle Seahawks and the San Francisco 49ers take the field on Fox-29. On Sunday at 4:30p.m., the Giants take on the Minnesota Vikings on Fox-29 and on Monday night, the Dallas Cowboys and Tampa Bay Buccaneers play on 6ABC/ESPN, starting at 8:15 p.m.

For AFC fans, the Los Angeles Chargers take on former Eagles coach Doug Peterson’s Jacksonville Jaguars at 8:15 p.m. Saturday on NBC-10. On Sunday at 1, it’s the Miami Dolphins and Buffalo Bills on CBS-3 and at 8:15 p.m., the Baltimore Ravens and Cincinnati Bengals take the field on NBC-10.

The SUN will have full coverage of the Eagles run to the Super Bowl.

Hurts returns from injury, leads Eagles to No. 1 seed in NFC