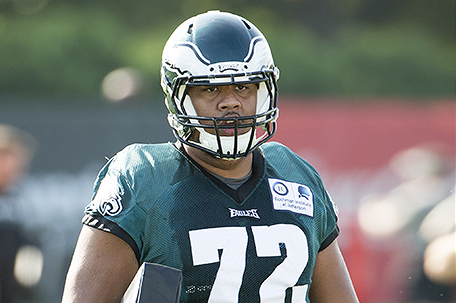 If the Philadelphia Eagles are hoping to make the playoffs and keep their rookie quarterback upright, the offensive line has to play better.

The results were disastrous as quarterback Carson Wentz was sacked five times and the Birds were held to just 239 yards of total offense as the Washington Redskins came away with a 27-20 win that was a lot more lopsided than the final score would indicate.

It wasn’t all Vaitai’s fault. He’s a rookie that was thrown into the fire for the first time against crafty veteran defensive lineman Ryan Kerrigan, who had two of those five sacks. Besides, the former TCU lineman wasn’t alone in not being able to control the Redskins defensive pressure.

But head coach Doug Pederson is confident that Vaitai is going to get better, so he’s sticking with his rookie right tackle.

“We had other breakdowns, offensively, other than ‘Big V’ [Vaitai], so I feel comfortable with him going again this week,” Pederson said. “He’s the type of kid that’s hard on himself. He makes the corrections [and] he moves on. He’ll work his fundamentals and technique this week.”

If the Eagles really want to help Vaitai and the rest of the guys along the offensive line, they need to invest in the running game. The Birds have four capable running backs that if you give them enough space, they’re going to make things happen.

With the Minnesota Vikings and their strong pass rush coming into Lincoln Financial Field on Sunday, the Eagles should establish the run.  It’s the best thing to do to give a guy like Vaitai some confidence and I think it’s going to keep an aggressive Vikings defense from pinning their ears back and going after Wentz.

Believe it or not, in last week’s win over Washington, the Eagles averaged 4.5 yards per carry.  Ryan Mathews gained 60 yards on nine carries. If the Birds hadn’t fallen into an early deep hole, they might have uses Mathews even more.

The thing that would give the Eagles offense a good jump start is if they would give rookie running back Wendell Smallwood, and running backs Darren Sproles and Kenjon Barner more opportunities to carry the football. What all three of those backs have in common is that they have ability to break off a big run once they find a hole.

If you’re a running back on the Eagles, the one thing you have to do is pass-block. To help Vaitai, the backs or even the tight ends are going to be needed to chip or slow down oncoming lineman or linebackers.

Whether it’s Mathews working the middle and between the tackles or Barner, Sproles, and Smallwood mixing things up with the speed game.  The Eagles are going to have to consistent in the running the game to the point to where they slow down the defense, so they can pass the football.

If you’re not a fan of the Eagles running back by committee, you would probably like to see one of those backs emerge as the lead running back.

Mathews is capable of filling that void if he can stay healthy during the grind of a 16-game season.  So far this season, he has had his shares of up and downs with injuries this season.

In the first five games of the 2016 season, Smallwood has shown some flashes of brilliance running back.   In last Sunday’s loss to Washington, he returned a kickoff 86 yards for a touchdown. When Smallwood got his chance against the Pittsburgh Steelers, he gained 79 yards on 17 carries and a touchdown.

In order to keep teams from teeing off on Wentz and taking advantage of a rookie tackle, the Birds need to find some confidence in the running game.