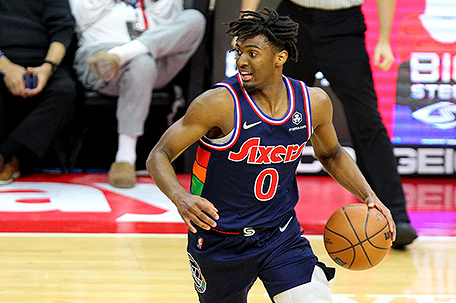 The Philadelphia 76ers continued their domination of the Toronto Raptors with a combination of balanced scoring and physicality on both ends of the floor.

The Philadelphia 76ers are two games away from advancing to the Eastern Conference semifinals mainly because they are getting something that you didn’t see much of during the regular-season—balanced scoring from the starters.

In the Sixers’ 112-97 win over the Raptors, the starting five all scored in double figures to help the 76ers take a 2-0 lead in the best of seven first-round matchup.

There are more than a few reasons that the 76ers have dominated the Raptors in this series thus far. Of course, you have to start with the imposing presence of Embiid, who scored 30 points in Game 2 and made life difficult for the Raptors, who tried to bully him and his Sixers teammates with their own physical presence.

“When (Embiid) and (Harden) are attacking the basket, they’re putting pressure on the paint, especially Embiid sealing and drawing two and three guys to him,” Sixers forward Danny Green said. “I’m getting great open looks, made a few tonight and hopefully get some more rhythm built and make some more in Toronto.”

Green, a member of the Raptors team that won the NBA championship in 2019, had 11 points and was 3-of-9 from three-point range.

“Everybody else shot well tonight. We shot 50 percent from three-point range (in Game 1) and we shot 46 percent (in Game 2),” Green continued. If we continue to shoot that well, it will be an easy series and hopefully open up the floor for (Embiid) so they’ll stop double-teaming him.”

In response to the Raptors’ physicality early in the game and the complaints of Toronto Nick Nurse who felt that Embiid was getting too many calls, the Sixers waged a constant assault inside the paint on offense.

“We responded pretty well,” Embiid said. “You look at the start. They got on us early. We didn’t panic. We came back and did what we did in the first game. We just kept attacking and getting into the paint, making plays for each other and getting to the free-throw line.”

Embiid’s presence has meant that the Sixers are a more balanced scoring than they were during the regular season. Next to Maxey, who scored 38 points in Game 1, the biggest beneficiary of the Sixers’ scoring balance has been Harris, who is averaging 23 points per game in the first two games.

“Tobias has been so good for us,” said Sixers head coach Glenn “Doc” Rivers. “He’s playing without thought, just being aggressive straight line. That’s been great for us.”

Rivers said Harris has had to make more than a few adjustments as a player because of the emergence of Maxey and the arrival of Harden after the trade deadline.

“Tobias has had [to] make more changes than anybody on our team and he keeps doing without complaint, and he’s a great example of what a good teammate should be and he’s been doing it every night.” Rivers said.

Improving his ability to catch and shoot the ball is something that Harris has been working on since the All-Star break.

“Catching the ball and shooting quick. For me, that was an adjustment, but a lot of extra hours in the gym and hard work of adjusting to it and being able to let it fly,” Harris said. “I’m in a great groove now. I just have to continue to have success.”

Rivers said the practices they got in before the start of the playoffs have enabled the 76ers to be a better team at moving the ball and finding better shots.

The Sixers/Raptors series moves up north on Wednesday as the teams take the floor at Toronto’s Scotiabank Arena. Tip-off is at 8 p.m. on NBC Sports Philadelphia.

Maxeymus! Were you not entertained?