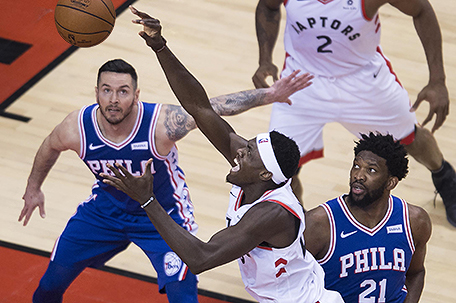 If the Philadelphia 76ers hope to win their series with the Toronto Raptors, everyone is going to have to step up.

In the first two games of Philadelphia 76ers Eastern Conference semifinal series against the Toronto Raptors, Joel Embiid has struggled to find rhythm in his offensive game due to a sore knee.

Now that the series has returned home to the Wells Fargo Center, the Sixers are going to need the guys around Embiid to provide some scoring power to get the former Kansas star going on the offensive end.

That was something the Sixers got in their Game 2 win over the Raptors Monday night when Jimmy Butler scored 30 points while pulling down 11 rebounds. On a night when Embiid took just seven shots, Butler’s performance kept the Sixers from being in a 2-0 hole.

“We are a big team,” Embiid said after the team’s practice on Tuesday. “We have a tall point guard. I guess I’m pretty tall myself. We’ve got a bunch of athletic guys and we have the freedom to go across the border and get it whenever we want to, so we’ve got to keep doing our jobs.”

The Sixers have a team of capable scorers, whether you’re talking Butler, Tobias Harris, J.J. Redick, Ben Simmons or even bench players like James Innis.

“We know that anybody can hot on a given nights,” Butler said. “It’s going to be hard to shut everybody down.”

Throughout the series, the Raptors have double and tripled team Embiid and he’s also been well-defended by Marc Gasol.  Embiid said when he gets the double team, he can get the ball out to any of the Sixers scorers.

“We got great shooters, we got guys that can make plays,” Embiid said. “It’s definitely easier to trust your teammates who know that you got them in a situation where you know there’s a high chance of scoring the ball and making sure you’re making the right pass or the right decision.”

But as good as the Sixers are on the offensive end, they have to be even better on defense against a Raptors squad that has just as many weapons that are capable of taking over a game. Kawhi Leonard has been killing the Sixers. In the first two games of this series, the former San Diego State star has had his way with the Sixers defense, scoring 45 points in Game 1 and 35 points in Game 2.

“He’s (Leonard) obviously a bigger guy than,” Harris said. “He’s taller, he weighs more, but it’s about making his touches harder and force him out on the perimeter a lot.”

“We know the bulk load of their offense goes through Kawhi,  Siakam, and Lowery,” Harris said. “In Game 2, there was a big emphasis to fly out to shooters , make them take contested looks.”

The Sixers and Raptors play on Sunday at 4 on 6ABC.