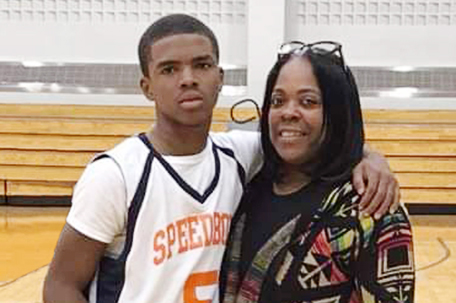 The hardship and pain of losing a child to gun violence is a devastating experience for any parent.

This year the murder rate in Philadelphia is steadily rising. According to the city’s latest update:192 people have been murdered. Of those 192 victims, there have been 21 children under age 18. murdered in Philadelphia.

In addition, 76 children under the age of 18 have been shot and badly injured. This latest report has caused a number of city leaders searching for answers to stop the shootings.

Quamir “Day-Day” Mitchell was a senior guard who played on the West Philadelphia High basketball team.  On May 13, he was going to a basketball court in Southwest Philadelphia, looking to play a pick-up game of basketball. Tragically, the 16-year-old senior guard never made it on the court; Quamir was shot at around 7:30 p.m. that evening . According to Philadelphia Police, Quamir was killed outside the fence where the court was located. A police officer who was on patrol that evening spotted the young man and rushed him to Children’s Hospital, where he was pronounced dead at 7:51 PM.

That evening, Quamir Mitchell became one of the latest victims to die of this city’s gun violence epidemic.

Quamir was set to graduate from West Philadelphia High in two weeks. According to his teachers, Mitchell was not only a good student, but he tried to be a role model for younger teenagers in his neighborhood.

In an effort to help neighbors cope with Mitchell’s death, Councilmember Kenyatta Johnson (D- 2nd Dist.) joined forces with the police captain of the 12th District and members of the community for an emergency “Peace Not Guns” Public Safety march to address the May 13 double shooting that left Mitchell dead, and another 13-year-old boy badly injured in his right arm. Today, the boy is still recovering from his injury.

A vigil was held at Deritis Playground, in honor of the 5-foot-7 guard. Over 200 people showed up at 5600 Grays Avenue, where the basketball court is located.

A deep sense of loss was sensed among the crowd. Many stories about Quamir were shared during the vigil. Later on, the crowd cheered as they released orange and blue balloons in the air and said their final goodbyes to a standout high school basketball player.

Day-Day could break down any defense and hit that jumper in a player’s face. He was that good of a player. In the All-Star game, I let him loose. I told him to do his thing. He scored 17 points and picked off five steals. Day-Day was unstoppable; he was all over the floor. He played a great game that day, and was named the most valuable player.

Once Quamir reached high school, he tried out for the West Philadelphia High Speedboys basketball team. He made the team with flying colors and helped lead them to three playoff appearances.

Speedboys coach Adrian Burke had spoken to Quamir only a few hours before he was killed, had a good conversation with him and told Quamir that he would see him at a summer league basketball game.

Kenny Goings, an offensive football coach at West Philadelphia High who often went to watch Mitchell play at his basketball games, said he thought the world of the flashy and talented little guard.

“Day-Day was a great basketball player,” said Goings. “He was one of the great ones in school history. He was a player who always listen[ed] to his coach. He was a player who played with a lot of heart. I’m going to miss Day-Day. It’s a shame a person would kill him over something stupid. I hope when they catch the killer, that he gets the maximum sentence in prison.”

Chief Inspector Frank Vanore said a man was taken into custody, but was later released, and that homicide detectives are still searching for surveillance video or any witnesses that could lead them to an arrest.

Anyone with any information is asked to call police at: 215-686-TIPS.

Meantime, the Mitchell family has requested  privacy at this time as they process this disturbing tragedy.