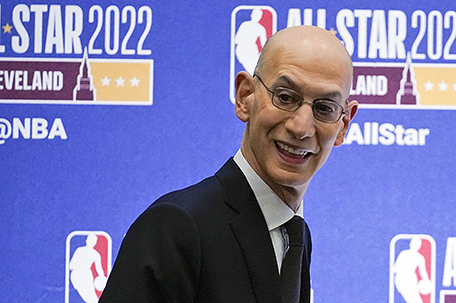 NEW YORK —What will the NBA look like at 100? While it is difficult to predict the future one year from now, let alone 25, I do know what will remain unchanged: Our bedrock principle that “sports have the power to change the world.”

Our teams and players will continue to use the game of basketball to teach lifelong values, give back to our communities and bring awareness to critically important societal issues.

We will also continue to embrace being a global league. Our games are distributed in more than 200 countries and territories, our social media community exceeds 2 billion people, and 25% of the players in our league grew up outside of the United States.

The NBA’s reach is expansive, though in many ways we are just scratching the surface in terms of our international growth.

I expect live sports and entertainment to remain special. There is something truly remarkable about 20,000 people of different backgrounds gathering together in an arena to enjoy a shared experience.

What makes NBA games unique — the proximity to the players, the fast-paced nature of the game and the energy derived from being around other people — will be as vital in 25 years as it is today.

What I do foresee changing is how fans around the world engage with the NBA. Today’s fans can watch NBA basketball on their high-definition televisions or just as easily on their smartphones.

But in 25 years, this notion of watching games on a “screen” may be irrelevant. Games will appear in any size — three-dimensionally — whether on a living room floor or in a ballroom. Watching basketball anywhere could feel like you are in an arena surrounded by thousands of fellow fans.

The game on the court will evolve as well, as a whole new group of players builds on the greatness of the generations that came before them.

We may see different kinds of schedule formats and tournaments that create new league traditions. And perhaps, once air travel becomes faster, we will have franchises outside of North America.

And if we are more popular at our 100th anniversary than we are today, I know we will have remained true to our mission to inspire and connect people everywhere through the game of basketball.