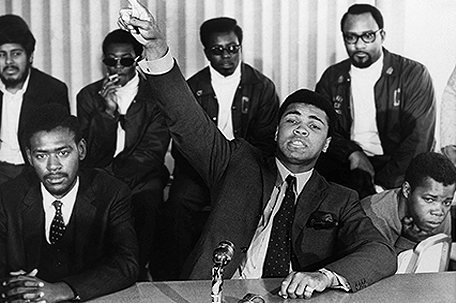 ABOVE PHOTO:  Muhammad Ali told a news conference that there is a “crisis among black people because we have too many leaders,” April 26,1968 in Madison, Wisconsin. Ali, flanked by followers including commandos from Milwaukee NCAA youth council, later told a student rally the black and white races must separate in America if there is to be peace.  (AP Photo)

Muhammad Ali meant a lot to me as a young, Black man growing up and trying to find himself.

Ali will always be the athlete that I measure all other athletes by both on and off the field because he was willing to risk his career as an athlete by not only joining the Nation of Islam, but also by refusing to be drafted into the military and fighting the Vietnam War due to his religious beliefs.

When Ali died on Sunday due to complications from a staph infection, he was lionized, which is easier to do now that it’s safe.

But when Ali was in his heyday, it wasn’t as acceptable to be a fan of his because of he spoke his mind about racism in America and never wavered in his beliefs at a time when it was harshly frowned upon for a Black man to be so outspoken.

Ali’s legacy was about defying the suppression of Black athletes who dare to be their own men and be outspoken about race. His willingness to stand up for his beliefs was part of a historical pattern that has defined the African American experience in sports.

There has always been an outright hatred for Black athletes, male or female, who are outspoken and refuse to define themselves and not through the eyes of white supremacy.

When Ali took on Joe Frazier in 1971 in the fight billed as the Fight of the Century, he was seen as the villain in the eyes of white America because of this outspokenness, while many boxing fans hoped that Frazier, who was less outspoken on racial matters and seen as a good “Christian”, would put Ali in his “place” as the more “American” of the two boxers.

As veteran sports writer Terence Moore pointed out on MSNBC recently, it wasn’t until Ali became stricken with Parkinson’s Disease and was rendered unable to speak, that White Americans opposed to the Ali of the 1960s and the principled stands that he took felt comfortable enough to embrace him.

This attitude on the part of White Americans toward Black athletes goes back to Jack Johnson’s reign as the first Black heavyweight champion of the world. Not only did Johnson destroy the physical notion of white supremacy, his brashness inside and outside the ring offended white American sports fans and frightened some African-Americans who feared reprisals from white people.

Johnson not only beat his white opponents in the ring, he taunted them.  At a time when a Black man could be lynched at the mere accusation of looking at a white woman, Johnson married two and flaunted his relationships in public.

In the book, “Bad Nigger: The National Impact of Jack Johnson”, author Al-Tony Gilmore quoted a white boxer who fought in the early 20th century who said: “Why, if that scoundrel would beat that white boy the ni*&ers would never stop gloating over it and as it is we have enough trouble with them.”

While Johnson didn’t see himself as a race man or an activist, the mere fact that he was his own man and refused to bow down to the harsh restrictions of racial segregation in the early 20th century or to defer white people.

After Johnson lost the title in 1915, it would be another 18 years before a Black fighter would get a shot at the title.  And it had to be someone that was seen as more palatable to them.

For a Joe Louis to get a shot at the title, he was not allowed to raise his hands above a defeated white opponent or even smile after a win. And because of Johnson, Louis was prohibited from publicly being pictured with white women.

Because of Louis’s quiet, unassuming nature he was beloved by whites in a way that Ali or Johnson was not. White fans seemed to be more comfortable when an African American athlete is quiet or willing to suffer fools gladly.

In Jackie Robinson’s first two years breaking baseball’s color line when he endured all the racist taunts from fans by not fighting back he was seen by the mainstream media as a sympathetic figure. When Robinson was allowed fight back on the field and stand up for himself and Black athletes off the field, the same White media that cheered him as a sympathetic figure vilified him for standing up for himself.

You can make the argument that this hasn’t changed much in America because Black athletes who speak out on social issues face racist hostility and calls for punishment and sanctions, such as in the case of the St. Louis Rams players holding up their hands in solidarity with Michael Brown, an unarmed Black shot to death by police in Ferguson, Missouri.

Being accepted on your own terms as a Black athlete is the legacy that Muhammad Ali leaves behind.

Maybe now that he’s no longer with us, America will, at long last, get used to it.

Muhammad Ali exemplifies the true spirit of the Liberty Medal

Muhammad Ali: The Long-Lost Movie Documentary gives glimpses of The Greatest in ’73 & ‘74