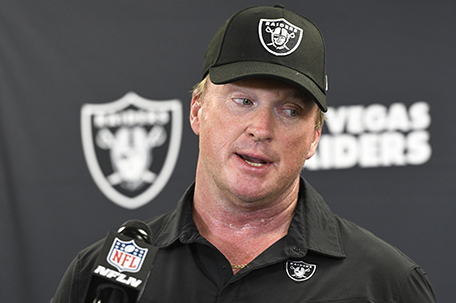 ABOVE PHOTO: Las Vegas Raiders head coach Jon Gruden meets with the media following an NFL football game against the Pittsburgh Steelers in Pittsburgh. Gruden is out as coach of the Raiders after emails he sent before being hired in 2018 contained racist, homophobic and misogynistic comments. A person familiar with the decision said Gruden is stepping down after The New York Times reported that Gruden frequently used misogynistic and homophobic language directed at Commissioner Roger Goodell and others in the NFL. (AP Photo/Don Wright, File)

When I read the New York Times’s scathing article on the email from now former Las Vegas Raiders head coach Jon Gruden, I wasn’t all that surprised or outraged.

The group of emails Gruden sent while on staff at ESPN offended just about every marginalized group in America merely left me shaking my damned head because it not only exposed the racist, sexist, and homophobic mentality that is apparently alive and well in the NFL, but confirmed that despite everyone taking to the streets after the murder of George Floyd, corporate America still views women, people of color, LGBTQ people and anyone who isn’t a heterosexual white man as disposable.

As USA Today columnist Mike Freeman noted in his article, it was the “White Male Grievance Hall of Fame.”

Reading those emails, which included attacks on NFL Players Association executive director DeMaurice Smith, former President Barack Obama, Colin Kaepernick and Eric Reid for taking a knee to protest racism in America, women referees, and the drafting of Michael Sams, the first openly gay NFL Draft pick, made me feel like I had watched Fox News and mainlined some serious bigotry.

That Gruden’s emails were also critical of efforts to protect the players from the deadly effects of concussions just made that feeling worse.

In a league where African American assistant coaches like Kansas City Chiefs Eric Bienemy or Tampa Bay Buccaneers offensive coordinator Byron Leftwich are constantly passed over for head coaching jobs despite getting Super Bowl rings with teams that someone else didn’t build before you got there, Gruden’s ability to be mediocre, ignorant, and employed rankles.

But you don’t get to be mediocre, ignorant, and employed unless you are part of a system that allows for such things.

These emails were found as part of an investigation into the Washington Football Team, owner Dan Snyder, and the shenanigans that have been a part of that team’s dynamic for more than a few years now. Gruden, whose brother Jay was head coach of the WFT, saying the quiet part out loud while talking with Bruce Allen, general manager of the WFT from 2009-2019.

If Gruden felt empowered enough to say that in an email to an executive from another team while working for the network that broadcasts NFL games, it was because he knew that he was among like minds.

It also exposes the fact that the NFL’s corporate culture, despite all of the virtue signaling it does through performances of the Black National Anthem, slogans on endzones and on the backs of helmets, and talk of equality, shows no respect for the group of mostly Black men who make them money.

(It also shows that Kaepernick settled his collusion suit against the league a little too soon, but we can talk about that later.)

Another marginalized group disparaged by Gruden’s emails was the LGBTQ community. NBCNew.com in September reported a survey by the Williams Institute at the UCLA School of Law reported 46% of LGBTQ workers experienced some form of unfair treatment in the workplace.

Outside of the workplace, LGBTQ people are also victims of violence. In 2017, the non-profit group, the Anti-Violence Project, reported a record high of 52 murders of LGBTQ people with 70 percent of those victims were people of color.

According to the website, goodjobsfirst.org (https://www.goodjobsfirst.org/sites/default/files/docs/pdfs/BigBusinessBias.pdf), 99% of Fortune 500 companies have paid settlements in discrimination or sexual harassment lawsuits.

When I was working for the Philadelphia Tribune 14 years ago, I interviewed a former NFL player who told me that the reason league owners were reluctant to hire African Americans as head coaches was because they didn’t want them to be the “face of the franchise.” Having to market the team using a person of color would have felt too much like equality.

Gruden’s emails against people of color, women and LGBTQ are a reflection of a long-standing culture of bigotry and discrimination in the NFL and the wider corporate community. It’s in the best interest of the sport to unhinge and dismantle this mentality before it’s too late.