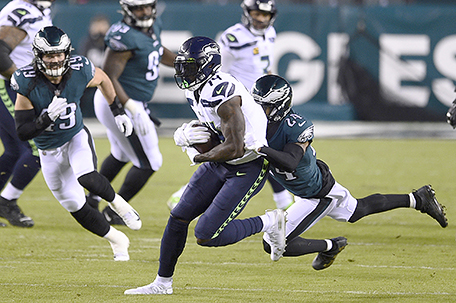 ABOVE PHOTO: Seattle Seahawks’ DK Metcalf, left, is tackled by Philadelphia Eagles’ Darius Slay during the first half of an NFL football game, Monday, Nov. 30, 2020, in Philadelphia.  (AP Photo/Derik Hamilton)

Another game, another below substandard performance from the Philadelphia Eagles offense.

The Philadelphia Eagles 23-17 loss to the Seattle Seahawks Monday was just another 60 minutes of watching an offense that seems to be stuck in a mental quagmire from which they cannot seem to escape.

On a night when they finally solved their problems converting on third down (8-of-17 on third down), Carson Wentz and the Eagles offense couldn’t get out of its own way for the third week in a row and didn’t make enough plays to win a game that was totally winnable.

Wentz, playing behind a patchwork quilt of an offensive line that’s been wracked by injuries, was sacked six times. He completed 25 of 45 passes for 215 yards with two touchdowns and one interception. The former North Dakota State star has thrown 15 interceptions in 10 games this season.

“We’re frustrated,” Wentz said. “I know I’m frustrated. … At the end of the day we have to do better and I’ve got to get better at making sure everybody is on the same page.”

After losing three straight games, Wentz and Doug Pederson are struggling to find ways to fix it before the season spirals too far out of control. With the way they are playing right now, it could get worse. The Eagles are on the road next Sunday against a Green Bay Packers team that’s in first place in the NFC North.

“We’ve battled with a lot of injuries and a lot of moving parts on the offensive line,” Pederson said Monday after the game. “We haven’t had the kind of consistency and continuity that we would like week in and week out … We don’t make any excuses for it — we just have to get better and move on.”

Watching the Eagles bumble and stumble over these three weeks leads me to the conclusion that this team and its beleaguered quarterback aren’t getting any better. I don’t care if they are still in contention in a weak NFC East.

Even if they somehow wrest the division title away from either the sorry New York Giants or the Washington football team, any resemblance to a playoff team or contender is coincidental or just plain delusional.

The Eagles if they make it to the playoffs, they would be like that below eight-seed in the NBA that would be swept by the Los Angeles Lakers. This team, with its plethora of injuries and mediocre performances by Wentz, is done for 2020.

But as long as Washington, New York and Dallas are playing at the same putrid level, there’s going to be that possibility that somehow the Eagles are going to win the division.

Even if the Birds win the division and are one and done in the postseason, they will have more than a few decisions to make, especially at the quarterback position. I don’t think Jeffrey Lurie or vice president of Football operations Howie Roseman is happy with the awful performances of Wentz this season.

Lurking in the shadows, of course, is 2020 second-round draft pick Jalen Hurts. As this season has moved forward with the poor play of Wentz, you know it’s going to be a matter of time before the guy’s front office says they’ve had enough of Wentz and his struggles with injuries and poor play.

The fact that Hurts was picked in the second round obviously means that there has been a loss of confidence in Wentz on the part of the organization despite the $100 million salary they’re paying him.

If Wentz and the offense continues to struggle this season and the Eagles don’t win the NFC East, how much do you want to bet that Hurts might be the front-runner to be the starter coming into next season?

Turnovers cost the Eagles again in another loss vs Browns