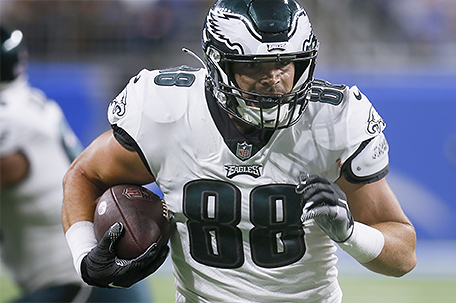 While the Philadelphia Eagles’ victory over an improved Detroit Lions squad provided fans with some positive things to focus on, there were also some negatives that can’t be ignored.

ABOVE PHOTO: Philadelphia Eagles tight end Dallas Goedert runs the ball after a reception against the Detroit Lions in the second half of an NFL football game in Detroit, Sunday, Sept. 11, 2022. (AP Photo/Duane Burleson)

The Philadelphia Eagles’ 38-35 season-opening win over an improved Detroit Lions squad at Detroit’s Ford Field can provide Eagles fans with some things to be optimistic about.

For starters, Birds fans have to be pleased with the performance of quarterback Jalen Hurts, who made plays with both his arm and his legs. After misfiring on his first five passes, Hurts completed 18 of his next 27 passes for 243 yards.

Facing constant pressure from a fired-up, blitzing, Lions defense, Hurts used his legs to prolong drives and to buy time in the passing game.  He gained 90 yards on 17 carries and one touchdown. For the game, Hurts accounted for 333 of the Eagles’ 455 yards of total offense.

“(Hurts) legs were huge,” said Eagles head coach Nick Sirianni. “What an unbelievable thing to have as a coach. ‘Oh, we called that, it didn’t work. (Hurts) made it right.”

Hurts converted eight of the Eagles 10 third down conversion by running and by passing.  Five of those came on Hurts passes and three came from using his legs when the Lions were blitzing. Hurts also converted two fourth down plays including his one-yard touchdown run and the quarterback sneak that put the game away from the Birds.

“I thought (Hurts) was in complete control of checking the plays, getting into different things, knowing what the defense was doing,” Sirianni said. “He saw the field perfectly. He really did. And we’re really talking about, ‘you’re doing this, we’ll do that. I thought he played a really outstanding game.”

In the passing game, Hurts made good use of Brown, who caught 10 passes for a career of 155 yards including a huge a 54-yard pass that put the Eagles at inside the Lions five-yard line late in the first half. The play eventually led to a field goal that gave the Birds a 10-point to end the first half.

“We know we have weapons on offense. Like today was my day. Next week, it could be Devonta’s (Smith) day or Dallas’s (Goedert) day,” Brown said. “We have a lot of skilled players on offense. To get everybody the ball is really hard. He’s trying to get everybody touches. I think we really did well.”

But while the offense gave fans some things to be happy about, the team’s defensive play showed that there may be some problems down the road if the Eagles don’t clean up certain things moving forward.

The defense gave up 181 yards on the ground to the Lions, 144 of them to former St. Joe’s Prep star D’Andre Swift, including a huge 50-yard run that set up the Lions first touchdown of the game. The Lions were also 9-of-14 on third down conversions. For all of the team’s new defenders including former Temple standout Hassan Reddick, there wasn’t much pressure put on Lions quarterback Jared Goff, who was sacked only once.

By the end of the third quarter, the Eagles offense had built a 38-21 lead and had seemingly put the game away, but the defense allowed two Lions touchdowns late in the fourth quarter and the lead to three with 3:51 left in the game.

But despite the struggles of the Eagles defense, it did come up with a big scoring play that contributed to the outcome of the game. Cornerback James Bradberry picked off an errant Goff pass and returned it 27-yards for a touchdown to give the Eagles a 21-7 lead with 6:26 left in the first half.

Eagles defensive end Brandon Graham said his team was happy for the win, but there’s a lot of work for the defense to do moving forward.

“When we were up, we should have kept that 17-point lead,” Graham said. “We got to make sure clean up running the ball because (181 yards rushing) is not acceptable. We know what we need to work on.”

Eagles fans will find out whether the defense’s holes have been plugged on Monday night when the team opens its home season at Lincoln Financial Field against the Minnesota Vikings. You can catch the game on 6ABC starting at 8:30 p.m.