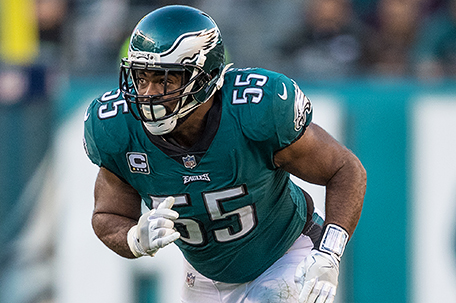 While Philadelphia Eagles Defensive End Brandon Graham would have liked to make the Pro Bowl, he and the team, have bigger fish to fry.

There’s a lot for Philadelphia Eagles fans to be proud of right now.

The Birds have a 12-2 record, have clinched a first-round bye and have a one-game lead over the Minnesota Vikings in the race for home-field advantage throughout the playoffs.  Even with the season-ending injury to quarterback Carson Wentz, the team is still a favorite to be the NFC’s Super Bowl representative.

Another thing that the team can be proud of is the fact that it’s sending six players to the 2018 Pro Bowl. Tight-end Zach Ertz, guard Brandon Brooks, defensive tackle Fletcher Cox, right tackle Lane Johnson, safety Malcolm Jenkins, and Wentz –who obviously won’t play due to his injury — were selected for the team.

While I’m happy to see all those Eagles players headed to the Pro Bowl, there are some Birds left off that list that shouldn’t have been. You can make an argument that Jason Kelce, the team’s scrappy, undersized center, who has done a masterful job of calling out offensive line protections and keeping opposing defenders away from Wentz, should have been on the roster as well.

More important than Graham’s sack numbers is that he has a knack for not allowing quarterbacks to feel at all comfortable in the pocket. While he doesn’t have 13 sacks and four forced fumbles like Dallas Cowboys defensive end DeMarcus Lawrence, teams around the league are certainly aware of his presence.

“It’s all about sacks because when you’re voting all you see is the numbers,” said Graham, who will probably make the team as an alternate. “I get it. I’ve just got to get more.  For me, they went down the list. It’s right in order and I understand that. All it did for me is put another chip on my shoulder for next year. “

If anything, Graham said, not being selected for the Pro Bowl will only make him hungrier as the Eagles make their run through the playoffs.  While it’s certainly an honor for a player to be named to the team, you don’t really want to play in that game because the game is a week before the Super Bowl.

On the whole, the former University of Michigan star would rather be in Minneapolis.

Despite not getting those Pro Bowl accolades, Graham is getting recognition from where it ‘s most important, and that’s from opposing offensive coordinators who have to come up with a game plan to stop him from blindsiding their quarterback.

That means that Graham is going to get his fair share of double teams and/or being chipped by a running back on the pass rush. Because Graham is a versatile, three-down defensive end who has also been a major force at stopping the run, teams are hesitant about sending ball carriers down his side.  That’s really the ultimate measure of respect in this game.

“That’s just a credit to how hard we work when people gotta alter their game plans and not run a certain way,” he said. “That’s cool. That just shows respect. I don’t take it personally, I just work a little harder to make plays from the backside.”