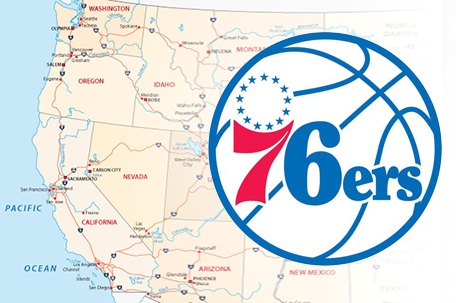 As they embark on a West Coast swing through the NBA, the Philadelphia 76ers are turning some heads.

Starting with Saturday night’s game against the Denver Nuggets, the No. 2 team in the Western Conference, the Philadelphia 76ers (32-17) will embark on a brutal four-game swing that will also include a game against the defending NBA champion Golden State Warriors.

The good news for Sixers fans is that their team is heading West armed with a lot of confidence and momentum, especially after Wednesday night’s 122-120 win over the San Antonio Spurs, a game in which they showed a lot of resiliency and mental toughness down the stretch.

Trailing 120-112 with 2:48 left, the Sixers closed the game with a 10-0 run to come away with the win. It was their sixth win in their last seven games. Center Joel Embiid keeps making his case as a candidate for the NBA’s MVP award. He had his 40th double-double of the year with 33 points and 19 rebounds.  At one point the second half, Embiid scored 16 straight points to keep his team in the game.

Perhaps the biggest endorsement for Embiid’s cause for the MVP award is his coach Brett Brown. When asked earlier this week about Embiid in comparison with Houston’s James Harden, Brown emphatically said his player was a more than worthy candidate.

Embiid isn’t getting his proper respect, according to Brown.

“All you really have to do in my eyes is look what happens when we don’t have him,” Brown said during his postgame press conference after the win over the Houston Rockets. “And look at the first halves that he has produced that has forced opposition coaches to make incredible adjustments in the second half and in my eyes, it’s not even close. He should be in these types of conversations.”

Ben Simmons had another triple double, his eighth of the season, in the win over the Spurs. Simmons had 21 points with 15 assists and 10 rebounds.

The team is beginning to find its stride, Simmons said.

“We’re all trusting each other,” Simmons said. “We’re just stepping up, we’re learning.”

In the crucial stretch of their win over the Spurs, it’s easy to focus on the Sixers clutch-scoring, especially a pair of three-pointers from rookie Landry Shamet and veteran J.J. Reddick, who put the Sixers ahead for good with a three-point bucket and a made free-throw after he was fouled by San Antonio’s Rudy Gay. You can also point to a stretch where Embiid score 16 straight points from late in the third quarter to midway through the fourth.

In a game where both teams shot 50 percent from the field and had trouble stopping each other from scoring throughout much of the game, the 76ers defense came up huge down the stretch by holding the Spurs without a field goal on 0-for-4 shooting. The Sixers defense also forced two critical turnovers and had two blocked shots.

“I thought we had really good resolve,” Shamet said. “I think we did a good job staying level headed and continuing to claw back.”

With this tough West Coast road trip on the horizon, the Sixers have shown in their last three games that they are arguably among the league’s best teams.  The 76ers last three games have been Western Conference contenders and they’ve won two out of three.  They had a heartbreaker of a loss to the Oklahoma City Thunder in a 117-115 last Saturday, but they came back on Monday to blow away the Houston Rockets (121-93) despite a huge night by Harden.

The Sixers are hoping they can bottle what the resilience they showed in the fourth quarter against the Spurs, especially on the defensive end.

Meanwhile, the Sixers bench has been giving them a huge lift. Shamet scored 14 points in the win over San Antonio. It was his three-point bucket with 1:44 left that brought the Sixers to within three during the 76ers run to win the game.

In Saturday night’s game against the Nuggets, the Sixers will be focused on stopping Nikola Jokic who is averaging 19 points, 10 rebounds and 7.7 assists per game.

And don’t even get us started on the juggernaut that is Golden State. The team will have to do everything it can and then some to get a win against the Warriors.

But if the last two games here at home are any indication, these Sixers are up for the challenge.

Another Opening Of Another Show