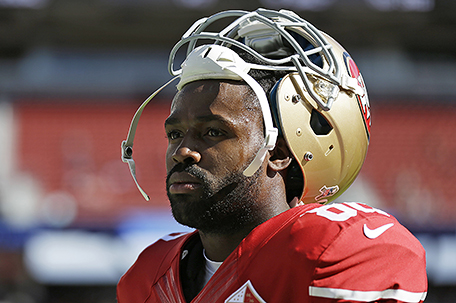 When the Philadelphia Eagles go to the Benjamin Franklin Parkway for the NFL Draft, wide receiver needs to be the top priority.

With the Philadelphia Eagles having needs at the wide receiver and cornerback positions, the dilemma for the Birds is whether they will fill those needs through free agency or the draft.

Coming into Thursday’s new NFL year, the hot rumor was that the Eagles were going to sign LA Rams wide out Kenny Britt. Britt wound up signing a four-year deal with the Cleveland Browns instead.

But as “consolation prizes” go, you could do much worse than former San Francisco 49ers wide receiver Torrey Smith, who the Eagles signed to a three-year, $15 million deal this week.

In the 28-year-old Smith, the Eagles get a wide receiver capable of stretching defenses. During his time with the Baltimore Ravens, Smith had his best seasons as a pro. During the Ravens Super Bowl run in 2012, he scored a pair of touchdowns in the team’s upset win over the Denver Broncos. In 2013, he caught a career high 65 passes for 1,128 yards and five touchdowns, averaging 17.4 yards per catch.

But while Smith is a good pickup, he’s probably not a long-term solution. The Eagles need to draft a wide receiver with the team’s first pick in the draft. Should Clemson’s Mike Williams or Western Michigan’s Corey Davis still be on the board when the Eagles make their pick at No. 14, they need to get them.

The type of wide receiver that the Eagles need is the equivalent of a five-tool outfielder in baseball, meaning that they can hit for power, hit for average, is a sure-handed fielder, has a cannon for an arm, and can cover the entire outfield if needed. To translate that into football terms, a good wide receiver has speed, runs good routes, has good hands, make plays in the Red Zone and can block in the running game without racking up a bunch of holding penalties.

When you at the top two receivers in the draft, Williams and Davis, you have a couple of guys who are five-tool receivers. With Williams, you have a guy that is 6-foot-3, 225 pounds and runs a  4.4 40-yard dash. He has the ability to run after the catch.

During Clemson’s run to the 2016 national championship win over a tough Alabama squad, Williams proved his worth in a big game situations. Going up against up Alabama’s All-American cornerback Marlon Humphrey, Williams caught eight passes for 94 yards and one touchdown.

If you put Williams and Wentz in the same huddle, the Eagles would be hard to stop. But my gut feeling is that he probably won’t be wearing Eagles green unless Vice President for Football Operations Howie Roseman does some draft day maneuvering to get him. Receivers this good aren’t usually around by the 14th pick.

But Davis of Western Michigan isn’t that big of a drop-off. This guy definitely has all the tools you need at the wide receiver spot. In his final season in Kalamazoo,  he caught 97 passes for 1,500 yards and 19 touchdowns.

He can run good routes, can move the chains on third down, has good separation capability and can contribute a lot to any offense. He was probably the main reason the Broncos were unbeaten coming into their Cotton Bowl appearance against Wisconsin.

At 6-4, 213 Davis is going to be a nightmare matchup for opposing cornerbacks and he’s good blocker in the running the game.  He’s another a guy who can take a short pass and turn it into a long touchdown run.  Looking at his highlight reel, Davis reminds me of Randy Moss.

But if neither Davis nor Williams are around, the Birds have other options to choose from. USC’s Ju-Ju Smith-Schuster or Washington’s John Ross, who ran a record 4.22 40-yard dash at the NFL Combine in Indianapolis, would be nice targets for Wentz to throw to.

Smith-Schuster met with Eagles team officials and worked out with Wentz during the combine. At 6-2,  220 pounds also has size and good separation ability. He can make the tough catch in traffic. And has the agility and speed to turn a short gain into a big play.

With Ross, who stunned NFL scouts with his record speed at the Combine, you get a guy with pure speed who can beat you deep.  At 5-11, you’re hoping that he has the toughness of a Steve Smith Sr., who played bigger than his 5-8 stature.

But his ability to run routes is a concern. Speed at the wide receiver position is always good, but if you don’t run the right route, it’s kind of meaningless.

At the end of the day, either one of aforementioned receivers here would be an upgrade on what they have now. And yes, I meant that exactly how it sounded.

So let’s hope that the Eagles don’t get distracted by a nice shiny cornerback and make wide receiver the team’s first round draft pick priority. Especially since the word is that the second round will be filled with some pretty nice ones.