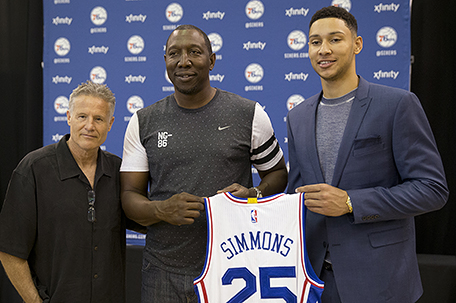 Because he hasn’t had much of a team to work with, Philadelphia 76ers head coach Brett Brown hasn’t had a lot of reasons to feel optimistic about an upcoming season.

In fact, the Sixers have been so bad that the only thing they’ve had to look forward to is possibly getting enough ping-pong balls to get the No. 1 draft pick.

But if you bump into Brown these days, there seems to be a little bit of pep in his step.

About a week ago, Brown shared his enthusiasm about the Sixers upcoming season with reporters while hanging out at Philadelphia Eagles’ training camp.

“Just that there’s a real delineated feeling of hope,” Brown said. “I feel that we all ought to look at people and players that we believe can be with this organization and in this city for a long time.  That although they are young and they are still 20-years-old, they’re talented.”

Simmons, the team’s No. 1 draft choice, showed glimpses of his tremendous potential during the games he played in the NBA’s summer league. If you got a chance to watch Simmons play, you saw a kid who made his teammates better by his court vision and passing ability.

When Simmons did score, he proved that he could use his athleticism to take the ball to the bucket, but he still needs to work on his jump shot.

With center Joel Embiid apparently 100 percent after his longtime foot injury and the recent addition of Dario Saric, who shot 40 percent from three-point range, and the team’s big men, including Jahlil Okafor and Nerlins Noel, the Sixers are looking like they have the beginnings of what could be a decent team.

Granted, no one is expecting to see the Sixers in the NBA Finals or even the playoffs, but there are some good young pieces that could really make some noise if a veteran is added through a trade or via free agency or another strong player can be added through next year’s draft.

At the very least, the motor is running for the Sixers, but how fast this car will go is anybody’s guess at this point.

“We’ve got a team that we’re excited about, that we think can put more wins on the board,” Brown said. “We understand that’s become more a part of our blueprint in our judgment day and it should.”

During his impromptu confab with reporters, Brown talked about the potential of Embiid despite his not yet taking the floor in an NBA game. The former Kansas star is on pace to play this season even though he did not participate in summer league competition, Brown said.

“(Embiid’s) summer is going to the way we hoped,” Brown said. “We’ve crafted a plan, we’ve scripted a plan from him that he is following religiously. When we start talking about all these different pieces, the city is going to see something very unique in a seven-foot-two that has a skill package that is exceptional.”

Brown’s excitement about the upcoming season is about the potential of Simmons with his size and the playmaking ability of a point guard.  He said how Simmons plays on the court will determine what position he will play with the team.

“(Simmons) is going to have some taste of that for sure. You know he will dictate that himself when he rebounds and leads the break,” Brown said. “The NBA point guard is the hardest position in the NBA. He’s never played a point guard, let alone an NBA point guard. … Initially, we’re going to play him in different positions and (point guard) will be one of them.”

With his 6-10 and 240-pound frame, Simmons can play multiple positions to help the Sixers, Brown said.

The Sixers will need to add some additional pieces and if they win more than 10 games next season, it will be seen as progress, especially considering how bad this team has been for the last few years. Any movement upward for the 76ers should be considered a step in the right direction.