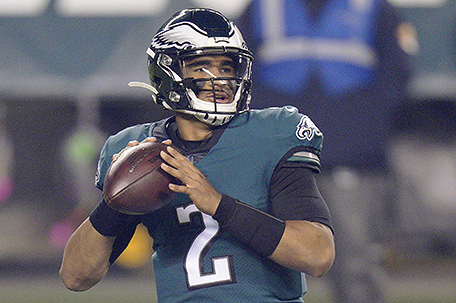 ABOVE PHOTO: Philadelphia Eagles’ Jalen Hurts plays during the first half of an NFL football game against the Washington Football Team, Sunday, Jan. 3, 2021, in Philadelphia.  (AP Photo/Chris Szagola)

Jalen Hurts has the grit and tenacity to be the Eagles starting quarterback.

Now that the Eagles have finally, at long last, drafted a true, blue chip wide receiver in 2020 Heisman Trophy winner Devonta Smith from the University of Alabama, all eyes will be on second-year quarterback Jalen Hurts.

At least for now, the Eagles and new head coach Nick Sirianni are going with Hurts, who started the last four games of the 2020 season, and it looks they’re going to surround him with a few weapons to see if he is going to be the Birds quarterback moving forward.

But if there’s anybody built to handle the pressure of being the Eagles franchise, it’s Hurts.

On the surface, Hurts invites some skepticism due to the 1-3 record he had in the four games he started in 2020 and the fact that he only completed 51% of his passes.

But in spite of that, Hurts appears to have earned the respect of his teammates through his work ethic. Eagles defensive end Brandon Graham said that knowing he’s the starting quarterback this season has helped Hurts’s confidence grow.

“Now that he’s the guy, it’s going to be a lot different now that the expectations are up there now, you got to keep on doing your regiment, which I see he’s doing and I think (Hurts) is having fun,” Graham said. “When you know you’re the guy, it definitely puts a little pep in your step a little more and it builds that confidence you already have inside of you. It grows even more now that people believe in you.”

Even in the midst of his teammates showering him with accolades, Hurts said he still has to earn the starting spot as the Birds quarterback.

Hurts said one of the things that he took away from his four starts last season for the Birds was that he has to play well and keep his mistakes to a minimum every time he steps on the field.

“Consistency is everything and not being a repeat offender,” Hurts said. “Those are two things that I think if you take away from those first four games I played in, I think those are things that I hold in high regard. Knowing that every play counts, every down counts. The football IQ you have in every situation of the football game, it all comes into hand.”

In those four games Hurts played in last season, he gave the offense energy. Even though he was a rookie, he won the respect of the team. In the Eagles’ 24-21 upset of the New Orleans Saints, Hurts came up huge, accounting for 274 of the Birds 413 yards of offense against a team that had the NFL’s no. 1 defense. He had 107 rushing and 167 yards passing while playing behind an injured offensive line.

“He (Hurts) played awesome,” said Eagles running back Miles Sanders, who gained 115 yards on 14 carries with one touchdown in that game last December. “The tape shows for itself. He’s so confident, he’s a natural leader. We just needed that. He gave us that spark that started from last week. Y’all seen it all, we played a whole four quarters today. We looked like a complete team. He did a helluva job.”

There’s a lot of reasons to be optimistic that Hurts has the mental toughness to handle the onslaught of scrutiny that he’s going to get from both fans and media.

During his college years at both Alabama and Oklahoma, Hurts was under the spotlight and demonstrated his ability to handle tough times. During his freshman season, Hurts led the Crimson Tide to the national championship 2016-2017 but lost to Clemson.

When Hurts lost his starting job to Tagovailoa, his teammates were wondering why he didn’t transfer immediately. But Hurts hung around and still played in all 13 games as a backup and led Alabama to a comeback win over Georgia in the Southeastern Conference championship game in 2018.

Hurts told the NFL Network’s Rich Eisen in 2020 his Alabama experience taught him how to deal with the ups and downs of life.

“You know the old artist Frankie Beverly. It’s the joy and pains of life and they always come. You have to expect those things and it’s how we respond,” Hurts said. “It taught me patience, and it also taught me to have a new profound appreciation for the game and what I do,” Hurts said. “Taking pride in everything. … It just took another step in growth. An appreciation for the game and appreciating every moment…is very important to me.”

After graduating from Alabama with a degree in communications and information sciences in 2019, Hurts transferred to Oklahoma for his final year of eligibility as a graduate transfer, learned a new system, won the starting job and led the Sooners to the College Playoff semifinal. That season, he threw 32 touchdown passes and ran for 20 and rallied Oklahoma 31-10 halftime deficit to a 34-31 win.

Hurts demonstrated his ability to overcome adversity and finished his collegiate career with a 38-4 record while leading two different teams to the college football playoffs.

While the pros are a different level and it still remains to be seen if Hurts can be a top-flight NFL quarterback, you have to like his chances with the grit and tenacity he displayed during his college days and what he has shown so far during his time with the Eagles.

Free Falling: The Eagles are terrible on both sides of the ball