Getting in shape for another season…Eagles first day training camp 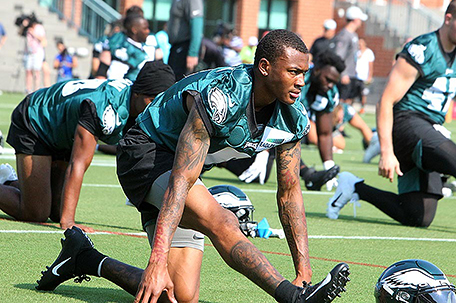 Wednesday’s practice kicked off Nick Sirianni’s first training camp as head coach of the Philadelphia Eagles. It also featured the first time that Sirianni had his team compete in 7-on-7 and team drills since the spring workouts focused on teaching the scheme.

The two things that stand out to the players from Sirianni thus far are his energy and the way he holds players accountable. Even defensive end Brandon Graham, the longest-tenured Eagle, has been corrected in meetings showing that it doesn’t matter whether you’re a rookie free agent or a veteran team captain, these coaches want each and every player to focus on executing the fundamentals.

“Everybody’s coming here with the right mindset to get better. Nick’s done a great job of setting the standards, setting what he believes is important to be successful in this league, as a teammate, as a player, as a coach. And now it’s on us to go out here and work on it every single day,” said All-Pro center Jason Kelce, who has now had seven different head coaches dating back to his college days at the University of Cincinnati.

“I think we have great leadership in the building. We have great coaches. We have great players. Now, we’re out here together, trying to work on it, and bring everything as close together and put it all in the right direction.”

Here are other news, notes, and observations from Wednesday’s practice:

• Following practice, Sirianni said that he wants to see quarterback Jalen Hurts take the reins as the No. 1 quarterback. Hurts took all of the first-team reps on Wednesday.

“I hold myself accountable to go out there and play at a high level every time,” Hurts said. “When you climb this mountain, it doesn’t happen overnight. You have to be patient with that. You have to put the time in. You have to remain diligent with your work and put maximum effort in every day.”

Hurts met the media face-to-face instead of virtually for the first time as a Philadelphia Eagle on Wednesday. As reporters shouted over each other to get their questions in, Hurts remarked, “So, this is how y’all do it?” Much different than the Zoom press conferences of a year ago. – Chris McPherson

• It was great to get out onto the field and watch football up close again – something I haven’t done in over a year. I arrived at the practice field early, and was on-hand when the skill players on offense started warming up. There was an assortment of equipment available, and it was great seeing the young guys working hard before practice. Rookie running back Kenneth Gainwell was glued to the Jugs Machine for a long time, while DeVonta Smith got dozens and dozens of reps on the tetherball before jumping onto the field. – Ben Fennell

• As individual periods got underway, my eyes were not leaving Smith. It’s clear that the first-round pick is making his presence felt immediately. He’s not a loud “rah-rah” guy, but he has an alpha personality that showed up just in warmups. Smith was first in line for each drill, and then got back to the front of the line to take the first “live” rep. It’s impressive to watch a young player carry himself the way Smith does. – Ben Fennell