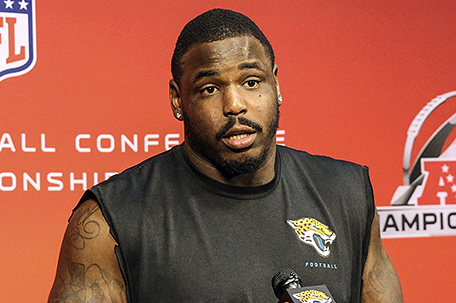 Through the early days of Philadelphia Eagles training camp, most of the talk has centered around the team’s offense and its vast array of weapons like DeSean Jackson, Nelson Agholor, Darren Sproles and Zach Ertz.

While there are lofty expectations for the Eagles to be among the most explosive offenses in the NFL, the Birds defense might fit that description as well, especially on the defensive line. Even with a few injuries and the loss of two defensive ends — Chris Long to retirement and Michael Bennett to the New England Patriots — defensive coordinator Jim Schwartz said having a solid front four will be the key to defense’s success this season.

“I say it all the time to our players: the defensive line is the engine that runs this defense,” Schwartz said.  “Those guys embrace that. They know they have to set the tempo for our team being physical, swarm around the quarterback, chase the ball, all those different things.”

The Eagles defensive line is relatively healthy considering the injuries to Fletcher Cox, Derek Barnett, and Timmy Jernigan.  They also have depth with a good mix of veterans and young players like second-year defensive tackle Josh Sweat, who the coaching staff is high on.

But the most important thing for the Eagles defensive line group is having healthy available bodies.  At this time last season, players like Brandon Graham came into training camp recovering from injuries.

“Being healthy, we can now focus on getting in shape together,” said Graham, who had four sacks and 15 tackles for a loss in 2018. “Now I feel like with all of us being out there, we can all come up together.”

As it stands now, Cox, who had 10.5 sacks and 15 tackles for loss,  is recovering from a foot injury and is expected to be back in practice before the start of the regular season. When Cox is permitted to fully participate in practice, he will have a lot of much-needed help.

Helping to Cox to anchor the middle of the Eagles defensive line will be 6-6, 290-pound Malik Jackson.  During his three seasons with the Jacksonville Jaguars, Jackson made it to the Pro Bowl in 2017.  What the Eagles like about Jackson is that he is a physical presence that will keep teams from double-teaming Cox.

“It took Malik half a minute to understand what we were doing on defense,” Schwartz said.  “He’s a tough out. He’s so long and big in there. He’s a really good pass-rusher.”

Cox said he’s glad to have both Jernigan and Jackson working with him in the interior of the Eagles defensive line and is expecting big things once he gets out there with his team for practice.

“It will be good for us because you have three guys that’s played a lot of football, guys that’s been a part of really good teams that know what it takes, guys that complement each other,” Cox said. “It’s going to be good once we get on the same page, we’ll have some fun and dominate the game.”

Schwartz said if Jackson, Jernigan, and Jackson can provide that pass rush up the middle, he’s not going to have use his defensive ends like Graham in the middle of the defense.

“When you have guys like Malik and Fletch who can rush inside, we might not have to go to having defensive ends inside as much as we did last year and the year before,” Schwartz said.

It was Schwartz deployment of Graham in the middle of the Birds defensive line that put him position to strip the ball from Tom Brady’s hands to cause the fumble that won the game for the Eagles.

By the time the regular-season starts, the Birds will also be getting back third-year defensive end Derek Barnett back. Before a shoulder injury ended his 2018 season, Schwartz said that Barnett was playing at a high-level last season.

To further bolster the pass rush from the defensive end position, the Eagles have brought back passing rushing specialist Vinny Curry back to the team.  Last season with the Tampa Buccaneers, Curry posted 2.5 sacks, 21 tackles (15 solo) and five tackles for loss.

“I’m really excited to have Vinny back,” Schwartz said. “He played a really strong role for us that Super Bowl year.,” Curry said. “Throughout the spring, he looked as good, if not better, than I’ve ever remembered him. I think you’ll see big contributions from him.”

The First Line Of Defense

Eagles’ new hire Vinny Curry–will they get more bang for their bucks?