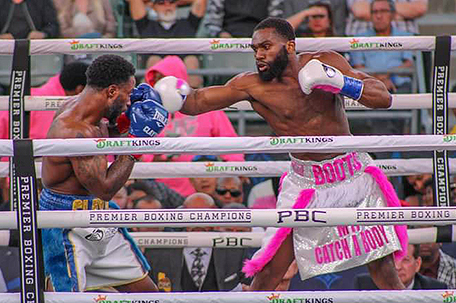 Before his battle with 34-year-old Canadian Olympian Custio Clayton (19-1-1, 12 KO’s), number one welterweight contender Jaron “Boots” Ennis (29-0, 27 KO’s) last Saturday, dedicated the  fight to 7-year-old Jax Ramirez, who is battling a rare medical disorder called IPEX syndrome. IPEX is a disorder which affects one in every 1.6 million people in the world. For Jax, the condition could  become fatal if he is unable to receive a bone marrow transplant.

Ennis became a friend to Jax after he read a newspaper article about his condition. Since that time, Jax has watched many of Ennis’s workouts on YouTube. He finds the motivation to stay alive each time Ennis prepares for his fights. Ennis reached out to Jax’s family and he has plans to spend time with him once he takes a break after his next bout.

At 24-years old, Jaron Ennis is a rising star in boxing. Born and raised in Germantown, he wants to become a world champion, so he doesn’t party, drink, smoke or chase women. Ennis spends most of his time at Bozy’s Dungeon, a 2,500-square foot gym named after his father, Derrick “Bozy” Ennis, on Paul Street in Frankford – it’s his favorite place to be. That’s how much he loves boxing — he doesn’t allow anything to distract him from his goals.

As a powerful welterweight, Ennis comes from a family of boxers and has the punching power of a Sugar Ray Leonard. His brothers Derek “Pooh” Ennis and Farah Ennis were pro fighters who achieved moderate success in the ring. Despite working hard in the gym, his older brothers never ascended to the world class level of being great fighters, but they did manage to climb the rankings. While growing up, Ennis watched his brothers headline shows in Atlantic City and even watched them fight on national TV. Derek Ennis was a middleweight who was ranked No.3 by the IBF and Farah Ennis, who was a super middleweight fighter, was ranked No.6 by the WBC.

Despite his family’s boxing legacy, his father has devoted much of his time being Jaron’s trainer. “Bozy” Ennis wears his body armor each time they train in the gym. He uses the shield to sustain the powerful blows that his son delivers each time he throws a hard punch. Jaron made his pro debut six years ago and has piled up victories in a fast pace. He has fought all over the country, which includes fighting in big arenas and small boxing halls.

Today, Ennis has recorded 19 straight KOs and he hasn’t missed a beat yet. His fight last Saturday was the biggest in his pro career; it was set up as an International Boxing Federation title eliminator on Showtime. The winner of last Saturday’s fight would become the mandatory challenger for the IBF’s welterweight title. Because Ennis has no boxing promoter, he does have a lucrative multi-fight contract with Showtime. That allows him to line up against the premier names in the premier boxing champions stable.

So far, Ennis has beaten and knocked out his opponents without blinking an eye. He can fight both right-handed and fight south paw. Before he battled Clayton last Saturday, Ennis knocked out Thomas Dulorme in the first round. That fight pushed Ennis a step closer for a possible IBF title fight against Errol Spence. Right now, Spence is expected to defend his title against Terence Crawford — that fight may happen later this year.

Right now, time is on Ennis’ side. Last Saturday at the Dignity Health Sports Park in Carson, California, Ennis was ready for his battle Custio Clayton. He knew that a victory over Clayton would be his ticket for a possible title shot. In this fight, he refused to allow Clayton to destroy his dream. So once the bell rang to start the fight, Ennis came out firing shots. He didn’t waste any time with Clayton. He caught Clayton off guard with several punches. Against Ennis, Clayton was never able to get his offense going. Ennis was able to overpower Clayton with several jabs. Ennis was able to dominate the first round with some powerful punches. When the first round ended, it was clear that Ennis was in control of the fight.

When the second round began, Ennis went straight at Clayton with a several straight lefts. Clayton never knew Ennis was setting him up for a knockout. Ennis kept throwing left shots at Clayton. He kept Clayton at the center of the ring. But then with about 30 seconds left in the second round, Ennis delivered a hard overhand right. The punch connected to Clayton’s right side of his head. Clayton dropped to the canvas like a ton of bricks. Clayton did manage to get back up on his feet, but he kept staggering across the ring. He was badly hurt. It looked like he was about to lose his balance. Clayton had grabbed the ropes to keep himself from falling back down. But the referee grabbed Clayton to stop the fight. The referee declared this fight to be over. Ennis had picked up his 27th knockout of his pro career.

After the fight, Ennis had called out Errol Spence who was sitting in the audience, so Spence was able to see how talented he was inside the ring. Ennis was able to prove himself in front of the California crowd.

“He (Clayton) leaned down and I just threw an overhand right,” said Ennis as he watched the replay. “I thought he was going to get up.”

Up and coming fighter from North Philadelphia overdue for a title