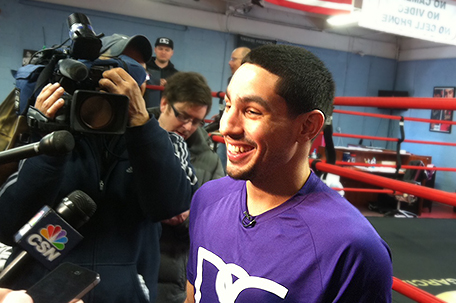 There is no doubt that world super lightweight champion Danny “Swift” Garcia is a beloved figure in North Philadelphia and is proud of his hometown.

But Garcia is also intensely proud of his Puerto Rican heritage and the island that is connected to it.

Because of this, Garcia’s next fight will be a sort of homecoming. Garcia, who holds both the World Boxing Council and World Boxing Association titles, will be his titles up against against veteran contender Mauricio Herrera in Bayamon, Puerto Rico on March 15 at the Coliseo Ruben Rodriguez.

“I think it means a lot to me just to reach out to my fans in Puerto Rico,” Garcia said. “They don’t have a champion right now, so I’m going to go out there and win this fight March 15 to solidify being a Puerto Rican champion.”

For  Garcia’s father and manager, the irrepressible Angel Garcia, having his son fight in Puerto Rico is a personal source of pride for him, especially considering some of the all-time great Puerto Rican champions like Alfredo Escalera, Wilfred Benitez and Wilfredo Gomez.

Garcia was at his gym in Northeast Philadelphia Wednesday going through the rigors of his workout in preparation for his fight against the 33-year-old Herrera, whose biggest win was in 2011 when he won a 12-round unanimous decision over World Boxing Organization champion Ruslan Provodnikov.

To say that 2013 was a very good year for Garcia would be an understatement. After a win over former world champion Zab Judah, he won a tough, hard-fought unanimous decision over Argentine knockout artist Lucas Matthysse.

The Matthysse fight was one that no one expected Garcia to win. After battling through an early barrage from Matthysse, Garcia assumed command of the fight from the middle to late rounds. In the 11th round, Garcia gave Matthysse the knockout punch.

Garcia has appreciated the whirlwind 2013 created for him.

“It’s been a good learning experience for me and a good journey,” Garcia said.

His father, Angel, sees a fighter whose peaking at just the right time.

“He’s gotten an older, not old as an old man, but as a young man,” Angel Garcia said. “He learns from every fight. A man learns until he dies. He’s better right now. He punches harder now than before.”

Coming into the Herrera fight, Garcia is in the unusual position of being the favorite in the minds of some boxing experts.

To him, that means nothing.

“The day I stop taking it seriously is the day I stop boxing,” Garcia said. “Anytime you step in the ring the other person is trying to hurt you, so I would never put myself in a position where I’m going into the ring and I’m not ready. I take no one lightly.”

It was widely speculated in boxing circles that world welterweight champion Floyd Mayweather Jr., who is scheduled to Marcos Maidana in May, would be a big-time opponent for Garcia.

But as much as Danny and Angel Garcia would like to prepare for a match with a legendary champion like Mayweather, they’re exercising patience.

Danny Garcia knows that it’s only a matter of time.

“At the end of the day, I’m building my own legacy and if the Mayweather fight comes, it comes. I’ll fight anybody. That’s why I signed up to be a boxer is to fight the best,” he said. “As far as me worrying about (Mayweather) and chasing that fight, that’s not me. I’ve never called nobody out. I stay in my own lane. I work hard. Whoever they put in front of me, that’s who gets beat up that day.”