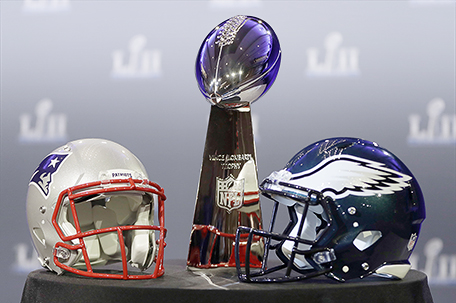 ABOVE PHOTO:  The Vince Lombardi Trophy is seen before a news conference by Commissioner Roger Goodell in advance of the Super Bowl 52 football game, Wednesday, Jan. 31, 2018, in Minneapolis. The Philadelphia Eagles play the New England Patriots on Sunday, Feb. 4, 2018. (AP Photo/Matt Slocum)

Coming into Super Bowl LII in Minneapolis on Sunday, it’s a no-brainer that none of the broadcasters and pundits are giving your Philadelphia Eagles any chance to knock off the defending champion New England Patriots.

And for all the times throughout the playoffs that the team has been written off, the Eagles, who are once again a pretty sizable underdog, are in Minneapolis getting ready for the onslaught of Tom Brady and Bill Belichick at U.S. Bank Stadium. According to the latest betting line in Las Vegas, the Patriots are a 4.5 to 5.5 point favorite.

Everybody’s favorite whuppin boy throughout the postseason has been Eagle backup quarterback Nick Foles.  Some writers have said that Foles is in over his head and will probably be the worst quarterback to win the Super Bowl if the Eagles are victorious.

But that perception flies in the face of the reality of Foles’s play in the Eagles wins over the Atlanta Falcons and the Minnesota Vikings.

In the Vikings game, the NFC Championship, Foles, who has a pair of shoes and a jersey in the Hall of Fame thanks to being one of only seven quarterbacks in history to throw seven touchdowns in a game, threw for 352 yards and three touchdowns. But in spite of his postseason success, most of the football establishment believes that Belichick has taken the two weeks he had to repair to analyze all of Foles’s quirks and weaknesses.

(By the way, Brady, for all of the perception of his GOAT-ness, has never thrown seven TDs in a game. Just saying…)

What folks are overlooking in this Super Bowl is that the Eagles, especially throughout this postseason, are a talented, well-balanced football team on both sides of the ball.  Of the three teams the Eagles have sent to the Super Bowl, this current team, even with the injury to quarterback Carson Wentz, is better equipped to come out of the Twin Cities with the win.

On offense, Foles has a myriad of weapons in his arsenal, something that was brutally on display in the NFC Championship win over Minnesota.  In the passing game, Alshon Jeffery, Torrey Smith, and Nelson Agholor are fast enough to stretch the defense and flip field position on any play.  Tight end Zach Ertz, who caught eight passes 93 yards against Minnesota, will find space in the middle of the Patriot defense.

In the NFC title game, Smith, Jeffery, Agholor and Ertz had at least 59 or more receiving yards against a Minnesota defense that was the best in the NFL. What the last two games should tell you about the Eagles passing game is that Foles and his receivers have developed a solid chemistry.

In the Birds Super Bowl XXXIX loss to New England, they passed the ball 51 times and ran it just 17.  That won’t be the case in Super Bowl LII.  This current group of Eagles, under head coach Doug Pederson, are capable of running the football.

Running back Jay Ajayi has averaged 5.8 yards per carry since he was traded to the Eagles and is capable of breaking off a big run. LeGarrette Blount will definitely get his share of touches in this game, especially in the fourth quarter.  Rookie Corey Clement will be involved in both the run and the passing game.

Pederson has proven throughout the season that he is not shy about being aggressive and going for it on fourth down.  During the regular season, the Eagles were third in the NFL in converting fourth downs.

The Eagles offense, even with Foles at the helm, is capable of the moving the ball on the Patriots, Belichick’s defensive schemes notwithstanding.   This season, the Patriots ranked 29th overall in yards allowed on defense.

Meanwhile on defense, the Birds front seven will have their hands full with the way Brady can sit back in the pocket and find his receivers. It’s going to be imperative that the Eagles front-four of Fletcher Cox, Tim Jernigan, Vinny Curry and Brandom Graham are going to have the kind of pressure that the New York Giants did in their Super Bowl wins over New England.

The Birds defense, which ranks fourth overall and first against the run, will have their hands full if Rob Gronkowski passes the league’s concussion protocol and is allowed to play. Danny Amendola and Brandin Cooks aren’t world-beaters, so they won’t be able to do much if the Birds secondary manages to disrupt Brady’s timing and communication with his receivers.

When you look at the statistics, the Eagles are a more complete team than the squad that went to Super Bowl XXXIX on both sides of the ball.  So if you look at this game on paper, the oddsmakers have it wrong.

But since the whole underdog thing has been working for them so far, you won’t hear the Birds complaining.

I’ll be in Minnesota for Super Bowl LII, so I’ll have all the pomp and pageantry for you in next week’s Philadelphia SUN, as well as on our Twitter (@philasunnews), on Instagram @philadelphiasundaysun and on Facebook (The Philadelphia Sunday Sun).

The Philadelphia Sunday Sun’s coverage of Super Bowl LII is sponsored by Tyler Made Media, producers of “Mark and Denise In The Mornings” on Mondays, Tuesdays and Wednesdays from 7 am to 9 am on WWDB-860FM. Join Mark, Denise and Chris on Monday morning as Chris broadcasts live from Minneapolis.